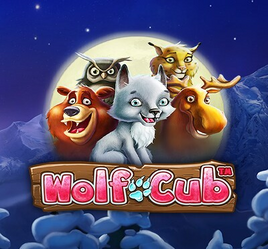 It was created by NetEnt and is similar in many ways to other gambling games from this software developer. It is dedicated to forest dwellers who successfully survive in the winter, cold forest. The main symbol of the slot is a cute, perky Wolf, which is present on the main screen during the game, cheering and entertaining players.

The total number of symbols in the slot is 11. On the screen, you will see images of different animals that act as thematic icons, as well as special symbols. Players will play for free along with the following animals:

The wild symbol is the trail of a wolf’s paw. It replaces the symbols missing for a full-fledged combination and gives the biggest win. The scatter is an image of the moon. Three or more symbols trigger the free spins cycle. The number of free spins is determined by a mini-round, in which the reels with the scatter symbol are rotated as many times as there are symbols. During free spins, the Blizzard feature can be activated. As soon as three identical symbols appear on the first reel, the playing field between it and similar symbols will be filled with identical symbols. During the free spins, the same symbols will show on the first reel; they will also appear on other reels. In this mode, you can win Super Mega Win, which is more than 1000 coins.

The game is played on 5 reels with 20 paylines. The player has to bet on the round, and not on specific lanes. Before starting the spins, it is necessary to set the bet level and the denomination of the coins. The cost of a chip varies from 0.01 to 1 Euro. As for the betting levels, you can choose from 1 to 10.

Payments are made as follows:

Using the control panel, users will be able to place the maximum bet with one click on the corresponding button, enable auto-spins, and load the paytable.

It’s 96.34%. This payout is respectable and regarded as typical for an online slot machine. This implies that the estimated payout would be €96.34 for every €100 bet, in theory. However, because the RTP is based on millions of spins, the outcome of every spin is always unpredictable.

Can I play Wolf Cub Slot for real money?

You must register at one of the online casinos, in order to gamble on Wolf Cub for real money. When you register as a new player, you can get a welcome bonus.

How much can I win playing Wolf Cub Slot?