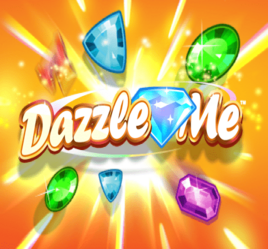 Dazzle Me by NetEnt: Read a Review and Play Online

This NetEnt‘s slot machine was released in 2015. It has 5 reels and is set up in a 3x3x4x4x5 row formation. Such an unusual setup creates 76 paylines. To get a winning combination, a player must land 3, 4, or 5 matching symbols or wilds on a payline. The Return to Player percentage of Dazzle Me is 96.91%. However, the game does not offer high variance. It is a low-volatile game. The maximum win is around 794.6x total stake.

Dazzle Me Theme and Symbols

The slot has a gems theme and a simple design. The bouncy soundtrack matches simple visuals.

The plain white reels are made up of just 6 standard symbols. There are four brightly-colored gemstone icons alongside a bell and a lucky red 7. The lucky 7 is the highest-paying icon in Dazzle Me, paying 10x the gambler’s total stake if he or she lands 5 on a payline. The wild diamond acts as a wild symbol. There is also a free spins scatter symbol that triggers the feature round if a gambler lands 3 or more of them.

The gameplay in this slot is straightforward. There are three bonus features, providing some decent opportunities available courtesy of linked reels in the free spins bonus round.

In the base game, the player should look out for special overlay wild diamond symbols that can fill entire reels. These icons can replace any other symbols aside from the scatters.

To trigger this feature, the player has to land 3 or more scatters anywhere on the reels. During the Free Spins round, the gambler also benefits from the Linked Reels feature. These are active on reels 1 through 4. During each free spin, identical symbols appear on 2 adjacent reels. The best thing that can happen here is to fill all of the first 4 reels with the same icon, which can deliver a player some chunky rewards.

What is the Dazzle Me RTP?

This online slot has an RTP of 96.91%. It also has a low variance since its hit frequency rate is around 19%, meaning a player lands a winning combination once every 5 spins on average.

What is the maximum win in Dazzle Me?

The maximum win is 794.6x your total stake. While this is available on base game spins, you can improve your chances in the free spins with the Linked Reels feature.

Does Dazzle Me feature free spins?

Yes, this feature provides you with up to 16 free spins.

Is it possible to win real money on Dazzle Me?

Yes, it is possible. You should create an account in an online casino and make a deposit. Once you have deposited money into your account, the real-money version of this game becomes available. Note that you will have to verify your identity to be able to withdraw money. It is recommended to do this beforehand to avoid wasting additional time when you already have money to withdraw from your casino account.

Is Dazzle Me online slot available on smartphones?

Yes, this slot is mobile-optimized. Therefore, you can enjoy this game not only on your PC, but also on your tablet or mobile phone.