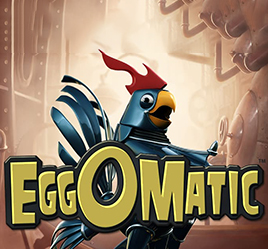 According to the name of the slot machine itself, it becomes obvious that we are talking about feathered friends and golden eggs. On the game reels, you will be able to observe symbols with the corresponding thematic coloring. The symbols in the game depict the main egg producers – chickens of different models and characteristics, which only speak of the brightly extraordinary approach of the developers to the creation of this slot. Also, there are some innovations in the slot machine, so before starting the game, it is recommended to familiarize yourself with the game’s simple rules.

The player has five reels and twenty fixed paylines. The maximum bet per spin is 200 coins, the denomination of which can be from one center to one dollar. During the game, you will probably be a little surprised by the rather non-standard arrangement of control buttons for Net Entertainment products. A very unusual cinematic paytable, which is made in the style of the 60s, will tell the player about all the possible winning combinations. Also, there you can find the amount of payment for each of the symbols and the properties that they have. In addition, the table contains the conditions of the bonus reward system and features, such as: Spreading Wild Egg, which is an expanding wild symbol, Free Spins Egg – free spins, Surprise Egg – an egg inside which is a surprise.

Surely, every player is familiar with the properties of the classic wild symbol. However, it is worth knowing that in this slot machine, it is the most important. Its first function is to activate the contents of the eggs, which are located at the top of the drums on the conveyor belt. The wild symbol in this game has an image of a rooster; after its appearance, it has the ability to catch any bonus egg that falls on it from above.

The essence of the Spreading Wild Egg bonus feature is that as soon as the rooster manages to catch a blue egg with the English letter W, this will cause all the symbols next to it to automatically turn into additional wild symbols. The possibility of triggering this function is possible both in the main game and during free spins.

The next lucrative Free Spins Egg game feature involves a series of free spins, which becomes available after the rooster catches the green egg with arrows located on the conveyor. The number of spins varies from 7 to 50. During the free spins of Free Spins Eggs, there is also an opportunity to get additional reel spins and incredible winnings, the size of which can be from 50 to 2500 credits.

Well, the last gaming feature is Surprise Egg. The name of this option speaks for itself – a surprise inside the egg. Thus, each egg contains one of the available options in the game: free spins, expanding wild symbol, and instant wins.

An unusual and non-standard game from the game manufacturer NetEnt will surprise every player. The slot has a lot of bonus features that will help players win big wins. You can try it in demo mode and draw conclusions about this slot.

What is the volatility of the EggOMatic Slot?

This is a medium volatility game. This means that it is suitable for both players on a budget. Plus, it’s a fairly low-risk game.

How to get free spins in the EggOMatic Slot?

During this game, it is possible to get free spins if you activate the free spins egg.

Can I play Eggomatic for free?

Yes, you can play this game for free. Just download the game. So you can get acquainted with its functions.

What is the RTP of EggOMatic Slot?

The return to the player in this slot is 96.5%, which is above average.