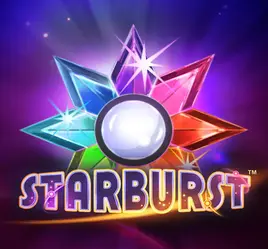 While classic fruit machines might be too simple for some gamblers to be entertaining, modern video slots, on the other hand, are sometimes overcomplicated with multiple features and options. For players looking for a perfect balance, there is a Starburst online slot released by the NetEnt studio. One will not find a diversity of features in this game. However, its simple design, top-notch graphics, and expanding wilds do their job well, offering entertaining gameplay.

Starburst game features 5 reels, 3 rows, and 10 paylines. The game’s developer has introduced flexible RTP, which means different online casinos can adjust the slot’s RTP anywhere between 90.05% and 99.06%, with the default return to player percentage being 96.09%, which is a nice average figure. The game’s volatility is low, offering gamblers small but frequent wins.

The Starburst slot machine is all about gemstones. It includes both new and classic symbols. NetEnt has added some animations to the symbols, making the slot more exciting. Thus, anytime the player lands a winning combination, any gems that are part of it will sparkle.

The lowest-paying icons that appear the most often on the reels of the Starburst online casino slot are purple and blue gems. When three of them appear on the reels, the player is awarded a prize worth 5x their stake. Four such icons award a win worth 10x the bet, and five-of-a-kind bring a 25x win.

The highest-paying icons of the Starburst slot are classic slot machine symbols 7 and Bar. The 7 symbol awards a prize worth 25x the player’s stake for three-of-a-kind, 60x for four, and 120x for five-of-a-kind. The Bar icon brings a prize of 50x the gambler’s bet for three, 200x for four, and 250x for five symbols on the reels.

When looking for casinos with Starburst online slot, you should be aware that this game does not have tons of bonus features. The only feature that can boost your winning chances and add some excitement to gameplay is the wild symbol. It is depicted by the rainbow-colored star and can only land on reels 2, 3, and 4. Once landed, the wild symbol expands to cover the full reel. Besides, it triggers a re-spin while remaining locked in place. If the gambler lands another expanding wild, both icons remain locked for one more re-spin with up to three re-spins possible.

What is the RTP and volatility of the Starburst slot?

The developer provided this game with a flexible RTP, so different operators can adjust this rate anywhere between 90.05% and 99.06%. The average RTP of the Starburst online slot is set at 96.09%. The volatility is low.

Who is the developer of the Starburst casino slot?

This online slot was created by NetEnt, one of the leading providers available in the industry since 1996. It is a trusted developer with a flawless reputation whose software is used by over 300 online casinos. Therefore, you can be sure all its games are fair.

What are the main reasons I should play Starburst slot online?

We consider the following points as the main reasons to try this game: low volatility and an RTP of 96.09%, 10 paylines that pay out both ways, expanding wilds with re-spins, and a beautiful design that gives a feeling of a classic fruit machine with a modern look.

Can I play Starburst slot for free?

Of course, you can. Choose a trustworthy online casino that offers this NetEnt title in the demo mode and launch the game in the free version. The best casino sites allow their users to play slots for fun an unlimited number of times. However, keep in mind that you can only win real cash after making a real money deposit.

Can I play the Starburst slot on my smartphone without downloading anything?

Sure, you can! The game is based on HTML5 and fully compatible with mobile devices, meaning you can load it right in the browser and play it on your smartphone or tablet whenever and wherever you want. All you need is a stable Internet connection.