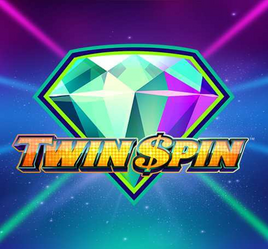 HTML5-slot Twin Spin received from the developers 243 options for forming a winning combination and 5 reels. The video slot contains a single symbol with advanced functions, a Twin Reel option, as well as several other functions.

Before starting the reels, the gambler independently selects the nominal value of the game credit and the number of coins. The main condition for the formation of a multiplier: the symbols must be located on adjacent reels.

The Twin Reel option functions in all rounds. Two randomly selected reels that are located next to each other become identical. Due to this, the chance of forming a prize combination increases significantly. There is also a possibility that there may be three, four or even five such identical reels.

NetEnt decided to design the presented online slot machine as a classical one, using as symbols a seven, a bell, cherries, a bar, jewelry, as well as a set of numbers and letters. It turned out to be a kind of symbiosis of the attributes of typical old-school video slots, which rarely intersect in one game.

The only icon with a special function in the slot game is Wild symbol. It appears only on the second, third and fourth reels, replacing the missing symbols to get a winning combination. Since the wild cannot appear on the first reel, it will not please you with a multiplier.

The developers did not include a scatter symbol, free spins, a jackpot and a thematic round in the video slot, betting on unusual gameplay and a classic appearance.

Interface of the Twin Spin Slot

Traditionally, the slot machine allows users to adjust the speed of rotation of the reels, the volume of the soundtrack, the level of graphics quality (you can optimize the slot for technically weak devices) and much more.

You can activate the automatic start of the reels by selecting the number of auto-spins. A window will appear in the corner with up-to-date data on the remaining spins and the Stop button.

What is the RTP of Twin Spin?

What is the minimum and maximum bet on Twin Spin?

What is the maximum win on Twin Spin?

The maximum win on Twin Spin is 9,720x your bet per spin.

Yes, Twin Spin offers 2 linked reels every spin which can randomly change to all five reels being linked.

How many paylines does Twin Spin have?

Twin Spin has a total of 243 paylines.

Can I play Twin Spin for free?

Yes, if you do not reside in a restricted country of the casino you play.