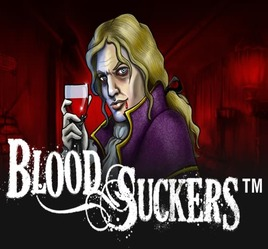 The game developers tried to convey the story about mystical creatures without any exaggerations. They depicted vampires in the form in which they were represented in the legends – terrifying monsters.

The main heroes of the game are vampires. The process of the game is to determine the bet, then spin the reels. If there are several identical symbols on the payline, the player receives a payout. Its size depends on how many images have fallen out and what type they are.

The main control buttons are located at the bottom of the screen. A round button with the letter «I» on the left edge of the panel opens the paytable, where all multipliers and symbols are listed. The Bet window shows the total bet per spin.

The five-drum machine uses 25 fixed paylines on which you can bet from 0.01 to 2 credits in the currency of the online casino. The total cost of a spin varies from 0.25 to 50 credits.

In Blood Suckers, a gambler will not encounter very large multiplications, even if he/she gets a whole glade of types or the most expensive symbols. The peculiarity, thanks to which many gamblers started playing Blood Suckers after the release and are playing now – is an excellent RTP.

There are 11 symbols in the Blood Suckers slot machine. Three of them are special ones that not only pay prizes but also perform additional functions. The rest only multiply the player’s bet by a certain coefficient.

12 closed coffins appear on the screen which the gambler can open in any order. If there is a vampire in the coffin, then an aspen stake is inserted into it, and the player receives a fixed payout. The game ends if there is no vampire under the coffin lid.

The maximum payout for one vampire is 2,000 coins. Each time the rewards are given out randomly, most often you get 80 or 160 coins for the “trophy”.

Due to the low volatility, the slot machine pays out on almost every spin. At the same time, a slot from NetEnt can award a prize of up to 50,000 coins. A high RTP gives a better chance of winning.

How many paylines are there in the game?

The slot has 25 fixed paylines.

How many characters are there in the game?

There are 11 symbols in the Blood Suckers slot machine.

Is there a Jackpot in the game?

There are no progressive jackpots in the Blood Suckers slot.

Is there a mobile version of the game?

The Blood Suckers video slot is modified for any mobile devices.

What are the free spins in the game?