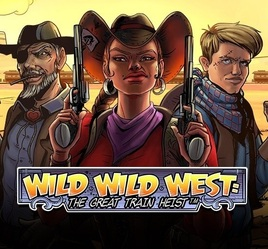 Wild Wild West is the latest online game created by the European slot giants NetEnt. Wild Wild West is a professionally crafted game where all details are considered. It offers five reels, while the maximum payout is worth x500 of a player’s stake. This slot has a simple ten payline format, which makes it easy and enjoyable for gamblers all over the world.

Wild Wild West has an RTP of 96.7%, which is not the highest yet not the lowest number in the market. The slot also offers a number of bonuses, including cash prizes and four free spins rounds.

The game is mainly built on the story of bandits who are trying to rob a train. The action takes place in the American Wild West. The design of the slot is of a top-quality, which speaks of the developer’s name – NetEnt. The game truly takes players to America’s past, with all the visuals and sound effects.

Among symbols used in a game are cowboys and train-robbing characters. They are created in accordance with the top comic books looks, even to tiny detail. Wild Wild West slot, instead of traditional poker card values, has four card suits. They represent the typical sheriff’s badge of that time. The design and theme of the slot make it attractive for players.

Train-robbing gang symbols are the ones which pay out the most at the Wild Wild West slot, offering from 200x to 500x at stake. There is also a golden train safe bonus that can be triggered on the reels. If a player gets three of these, there will be a possibility to get an instant win of between 5x and 50x of a bet.

One more feature – the Pick and Click bonus game. This can be triggered when three safe scatters are on the reels 1,3, and 5. This bonus game offers a payout of 50x total bet.

The slot offers a setup of 10 fixed lines. The wager cannot go any lower than ten coins in it. However, it could go up to 100 coins per spin. That means, betting ten coins per line. A top bet at the game is worth $100, while the maximum one – $0.10.

Can I play this slot using my tablet or mobile phone?

Yes. NetEnt has developed a game with HTML5 technology. The Wild Wild West can be accessed from a laptop and desktop, as well as it can be played on the go using a smartphone or tablet.

What is the RTP of Wild Wild West?

This online slot machine offers an average RTP of 96.74%.

How would I go about winning the biggest reward during free spins?

The biggest reward offered during the free spins sessions is $10,000. It is possible to get in only with a 2x multiplier wild that applies to the right combo of symbols.

What is the maximum amount to get in the base game with regular wilds?

Regular wilds that used for the base game rounds, and they usually pay out 500x. That is the highest amount when it comes to the base game at Wild Wild West.