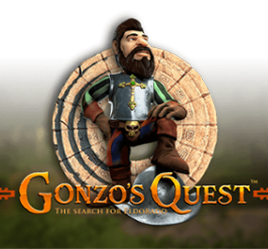 In this game, gamers will go on an expedition to the jungle with Gonzalo, the Spanish conquistador, in an attempt to find the city of gold, El Dorado. Exciting gameplay awaits players in this animated 3D slot.

The Theme of the Slot Machine

The game starts with a short and fun animated video. This mini-movie tells the players the story of Gonzo, where he jumps from a ship into the water and begins searching for gold. After the video ends, all players enter the game with five reels and 20 pay lines.

Players can learn all the functions of the device in demo mode. The demo mode will allow you to play Gonzo’s Quest slot machine for free and without registration. The slot is not intended for offline play and cannot be loaded. The game is adapted for all devices and works in full-screen mode on PCs, Smartphone’s, and tablets. High-quality graphics and 3D animation are the distinctive features of the slot. Technical data of the game:

Symbols in the Game and the Paytable

Payouts are made based on the linear bet and the coefficient of the winning combination. Relatively low payout coefficients increase several times when composing combos and activating respins. The first prize chain is paid according to the paytable, and the second and subsequent ones have additional multipliers: x2, x3, and x5. Only a consistent series of practical respins is paid, taking into account the multipliers, and this is the main secret of the stable popularity of the slot among gamblers.

The symbols descend from the top of the playing field, resembling the fall of stones from a mountain. When a winning combination is formed, the symbols are scattered. And the gaps left by them are filled with prominent new characters.

There are two special characters:

Players need to collect three or more golden free fall symbols on the same pay line, and then you can earn ten free spins. The bonus game consists of 10 free spins, during which the avalanche function is still used with the launch of respins when composing combos. But higher multipliers are applied to the payouts than in a regular game. Bonus round, the repeated drop of the scatter brings the additional player spins, which depend on the location of the symbols on the active lines. There is no NetEnt Progressive jackpot in Gonzo’s Quest slot from NetEnt. The probability of any winning combination is 37.29%.

Gonzo’s Quest is fully compatible with Android and iOS devices and works perfectly on computers and laptops based on Windows, Mac, and Linux operating systems.

The slot became the first device with cascading spins and is already considered a classic of NetEnt.

What is the RTP of Gonzo's Quest slot?

What is the maximum multiplication given by Gonzo's Quest slot?

Under what conditions does the player get 15 free spins in the bonus?

If three or more scatter symbols appear on the 4th or 5th line, thereby activating the bonus game, then the number of spins will not be 10 but 15. The same applies to the bonus itself; 15 spins will add in the premium round if a retrigger falls on these lines.

The main character of the game-a a colorful Gonzo-has an actual prototype. This is the Spanish conquistador Gonzalo Pizarro, who in 1540, together with other adventurers, went in search of the mythical country of El Dorado.

Is it possible to change the number of lines in the slot?

Not for this slot. The provider has made the number of lines unchanged; you can change the value of coins.