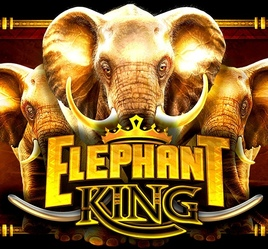 Elephant King is an exciting slot machine from an IGT developer. The device is dedicated to the African fauna, has beautiful graphics and animation, original soundtrack. The slot is easy to manage, with well-developed functionality, high winning coefficients, and excellent RTP. The emulator is adapted for different platforms to play on PCs, tablets, and Smartphone’s.

The game invites players to an adventure in the Sahara on five reels and 40 paylines. Players can try the game in demo mode for free and without registration.

The graphics of the slot machine is entirely consistent with the theme of the game. His drums are spinning against the backdrop of a beautiful African landscape. The animal images are very realistic, and the elephant symbol is animated.

The buttons designed to control the machine are located on the panel at the bottom of the screen. Some controls allow you to change the size of the bet, keys to start and accelerate the reels, volume control, and a button that opens access to the paytable of the slot

Rules of the game

The slot machine has five reels and 40 paylines. The maximum winning coefficient stipulated by the rules of the game is equal to ×533. If the bonus option is activated, the number of winnings that the gambler can count on will increase.

The payout percentage will please the players, and it is 96.02%. Prize chains are formed on active lines of 3-5 identical pictures and are paid according to the coefficients from the paytable. If several winning combinations are formed during one spin, the payouts are summed up.

Elephant King video slot pleases players with several bonus features that give everyone a sense of drive from each spin.

Special symbols in the game are Wild and Scatter elephant. The first one complements the unfinished prize combinations, replacing other pictures. The scatter is paid regardless of the location on the screen and triggers bonus options.

Above each reel of the slot machine, there are boxes in which prize points are received. They are awarded to the gambler during the main game when a Scatter appears on the screen. If several Scatter symbols appear on the reels at once, the player will receive a bonus in the form of a cash prize or a free spin. The size of the free spin will depend on the number of points in the corresponding boxes.

Rewards include credit prizes or access to a free spins bonus. Credit prizes range from 500x to 10,000x of the selected coin value and are saved during gaming sessions. In the main game, bonus scatters appear only on reels 1, 3, and 5, but they can land on any reel during free spins.

The slot offers quite frequent winnings on paylines. Payout table both for Elephant King slot machines for real money and free slot machines shows the value of each combination in the form of fixed numbers. The numbers change when you get a win.

The fewer rounds a player plays, the more likely the game’s outcome will deviate from the expected payout percentage. Demo slots can be a helpful solution, and gamers can play many rounds to get a good return.

Players can try to play King of Elephants for free before playing for money. In this way, players can explore the possibilities of the game. The slot is optimized for playing on a mobile phone. Gamblers can have a great time playing the game using different platforms, whether computers, tablets, or cell phones.

While playing Elephant King Slot online, the user is guaranteed vivid impressions thanks to high-quality graphics and a dynamic soundtrack.

What is the percentage of return in the game?

RTP (percentage of return in percent) of Elephant King slot – 96.02.

Is the game available on mobile devices?

Elephant King slot machine is optimized for playing on a mobile phone and is available on all mobile devices.

What platforms does the game support?

Players can enjoy playing the slot machine on various platforms, whether a computer, tablet or mobile phone.

How can a player get free spins?

To get free spins, you need to catch three scatters on the reels of the slot machine simulator.

The game’s theme is Nature, Safar; the user can admire the four-legged African inhabitants in their natural habitat.