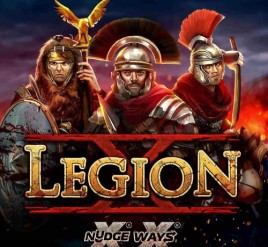 Legion X is an online slot inspired by the Imperial Roman Army. It offers interesting gameplay and high-quality graphics.

In demo mode, players can explore the game and improve their gaming skills. Once they decide to play for real money, they will have a winning chance of 96.04% (RTP). Overall, Legion X by NoLimit City delivers a rich user experience.

Legion X is devoted to the Roman Empire, namely the legion of the Imperial Roman Army. The slot features A, K, Q, J, and 10 royals which have been designed in the Roman style. It also features 5 barbarian warrior symbols, where the barbarian with the helmet happens to be the highest paying symbol.

Apart from graphically advanced visuals, the game features an epic soundtrack worthy of a Hollywood movie. The atmosphere in the game is extremely delightful.

Legion X comes with plenty of features, which bring attractive benefits. For example:

Whenever a stacked wild symbol appears on the reels, it always gets there to be fully visible. With each move, a multiplier gets bigger.

These symbols usually land on the first and last reels. When they do, they convert low-paying symbols into wilds. As a result, it becomes easier to form a winning combination.

Free spins bonuses are offered in different forms. For example,

How to Win in Legion X Slot?

Legion X has 72 ways to win. To hit payouts, players have to land at least three symbols in a row on adjacent reels. The warrior symbols are probably the most generous symbols in the game. The most generous of these is the warrior with the metal mask that promises a 2.5x the initial stake.

Being a highly volatile slot, it offers a top reward of 31,000x. In addition, there are numerous bonus features that help enhance these wins.

Legion X is considered to be a highly volatile slot. Despite the hit rate of 25%, the small wins happen quite often. The largest wins are less frequent, though.

What is the feature buy in Legion X Slot?

Players can start the bonus round after catching a dough. The feature buy options include but are not limited to 8 Legion Spins, 10 Equestris Spins, and 10 Gemina Spins.

No, it doesn’t. The slot can be launched via a desktop or mobile browser. The user experience remains high regardless of the used format.

How do xNudge symbols work in Legion X Slot?

xNudge wilds always nudge, which makes them land fully stacked on the reels. Every nudge increases a win multiplier.