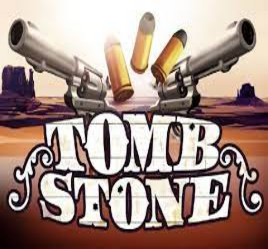 Nolimit City transports you to the Wild West, where you will assist the Sheriff and Marshal in apprehending infamous criminals. Edda Star, a bank robber, Skinny Joe, a horse thief, and El Gordo, a bandit, all have large bounties on their heads, and it’s up to you to enforce the law. Tombstone is a video slot with five reels and 108 different ways to win.

Cowboys all around the world like playing Nolimit City’s Tombstone online slot. Watch as wild wanted posters, dead or alive, push into place to give you a hefty reward.  Your award will then be multiplied by each spot they move.

The last release game, which starts at $0.10 per one spin, has three nudging Wilds and three incredible bonus features: Justice Spins, Gunslinger Spins, and Bounty Spins. Prepare to mount your horses and go on a whole new adventure on the American frontier.

In the Justice Spins feature, the wilds also turn sticky. In the Gunslinger Spins mode, you may get unlimited multipliers as well as additional spins. The Bounty Spins feature combines all of the best aspects of the previous features. The Tombstone slot machine is available to play on mobile and desktop at several leading casinos, and you may win with a multiplier up to 11,456 times your wager.

How to Play Tombstone Slots

In the paytable, you can see the rewards that may be won by lining up a variety of symbols. All of these combinations may be won with the support of dead-or-alive wilds, which can be used to replace other symbols. Wilds can even nudge in from multiple directions, increasing the reward multiplier by one for each location they change.

There are three Outlaw Wilds on the reels: Edda Star, Skinny Joe, and El Gordo, all of whom appear only on the three center reels and cover the full reels. They can be used in place of any ordinary sign. The Sheriff’s Badge and the Marshall’s Badge, like the Dollar Sign Scatters, are Scatters that activate particular features.

Dynamite, which is used to steal banks, Gold Bars, and Money Bags, which are stolen after the heist, Horseshoes, and a number of guns, will be among the regular game symbols. Low-paying symbols are represented by playing cards.

The last release’s reels have a Saloon entrance and a reel configuration of 2-3-3-3-2. There are no paylines in the Nolimit City game and 108 ways to win, which makes things a little easier because all you have to do to start winning is hit at least three matching symbols on successive reels, beginning from the leftmost reel.

The number of coins each spin is set at ten, but the coin value may be changed, allowing players to spend as little as $0.10 and as much as $50 per one spin.

You should know that Wilds appear on reels 2, 3, and 4, and they all nudge and cover the whole reel to provide you a chance to earn a reward. Additionally, each of them will provide you with a random multiplier (1x-3x). There are three unique features available. Justice Spins are triggered when you land a Sheriff Badge and a Marshall Badge on reels 1 and 5. You’ll earn three spins with locked Outlaw Wilds that will stay in place until the bonus ends.

Three Dollar Sign Scatters on three center reels will activate the Gunslinger Spins bonus, which awards 10 free spins with rising multipliers added by Outlaw Wilds that remain active until the feature expires. Extra spins are awarded if you land more Scatters. Finally, three Dollar Sign Scatters, a Sheriff Badge, and a Marshall Badge will activate the Bounty Spins. Gamers are given 12 spins with sticky Outlaw Wilds and multipliers that increase. This is essentially a hybrid of Justice Spins and Gunslinger Spins. You’ll also get more spins if you get more Scatters.

Can I play Tombstone slots for free?

Yes, you may try the Tombstone slot for free. Nolimit City made lots of demo versions of their games where you can try if you like the gameplay or not.

What is the Tombstone`s RTP?

The return to player value at the Tombstone slot machine is 96.18%, which is slightly higher than average. So, the slot may be called honest.

Is there a free spin feature in the Tombstone slot?

Yes, the Tombstone slot machine offers a number of free spins with extra bonuses like sticky wilds and multipliers. Justice Spins, Gunslinger Spins, and Bounty Spins are among them.

What is the maximum win in the Tombstone slot machine?

The maximum win on Tombstone is 11,456 times your total bet for each spin. The Gunslinger Spins feature, which has an infinite win multiplier, is where the larger prizes can be found.