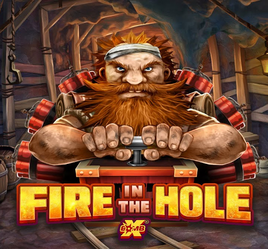 Fire in the Hole Slot to Play for Free

Fire in the Hole is a NoLimit City release. The game offers free spins, exploding wilds, expanding reels, and more exciting features. This is a high-volatility slot with an RTP of 96.06% and a maximum win of 60,000x.

Theme and Graphics of Fire in the Hole

This slot features a more “traditional” theme than other developer’s games. However, it includes a fiery little dwarf character who takes the online slot out of the more ordinary realm. Just like most Nolimit City’s products, this one looks great. It is a well-designed game with a rugged aesthetic. It also features a pleasant soundtrack that suits the slot’s mood.

Fire in the Hole’s Symbols

The highest-paying icon is a lantern. It offers a reward of up to 375 coins. The next high-paying symbols are the satchel, boots, rope, and a chisel. The lower-paying ones are traditional card representations K, Q, J, 10, and 9. The wild symbol is represented by a dynamite box, and the bonus symbol is a lump of gold with an “S” on it.

How to Win in the Fire in the Hole Slot

The slot initially has 486 ways to win, but this is just the beginning. If the player manages to unlock the rest, he or she will get 46,656 winning ways available.

On each spin, the gambler starts with the first three rows. The additional ones can be unlocked in the following ways:

An xBomb is a special wild symbol. It substitutes for other icons and removes all adjacent symbols, causing the multiplier to increase by 1. These icons can explode whether or not a win has been landed.

The Wild Mining feature is triggered once the player lands three or more matching symbols on a line, but he or she does not land a win. When this type of “near-miss” occurs, up to three wild symbols are added to the reels.

The Fire in the Hole slot also features the Lucky Wagon Spins that are triggered once 3 or more bonus symbols appear on the reels. The top row of the slot grid reveals one of the following enhancers for each spin:

The Lucky Wagon Spins ends once the reel is full or there are no more spins left. Collected chests triple in value before being fully paid out.

Who is the developer of the Fire in the Hole slot?

This game was released by Nolimit City software provider.

Can I play Fire in the Hole on my smartphone?

Yes, this is a mobile-compatible slot.

What is the RTP of Fire in the Hole?

What is the biggest win available on Fire in the Hole?

What is the Fire in the Hole's volatility?

Does Fire in the Hole offer free spins?

Yes, this slot has a Lucky Wagon Spins feature that is a variation on the streak respin concept. The player’s aim is to collect coins to win more free spins and win real cash.