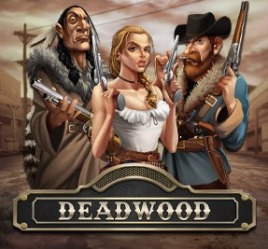 Deadwood is a Wild West-themed online slot from Nolimit City. It’s a stunningly designed online slot with intriguing characters and a distinctive graphic style. A ghost town may be seen in the distance, and tumbleweed even drifts by. There’s excellent Old West music playing in the background, and shooting may happen at any time. Overall, it’s a fantastic design that transports gamers back in time while also increasing the thrill of online gaming.

Deadwood slots from Nolimit City have 576 ways to win, and players may stake anywhere from to. Per spin, you can win between 10 and 100 coins. The music and sound effects may be toggled in the settings menu, and the quick-play button is positioned beneath the spin button. In the autoplay menu, you may set a loss or win limit (based on a percentage of your total amount).

You travel to the legendary town of Deadwood through the setting of a dusty street. It’s what you’d expect from a Western-based slot game. Bullet holes emerge when you click anywhere on the screen, which is a lovely touch.

The stylized A, K, Q, J, and 10 royals are among the symbols. Shotguns, whiskey bottles, money safes, gold pocket watches, and gold bullion bars are the higher value items. The highest value symbol, gold bullion bars, pays 0.25, 0.75, or 3.75 times your bet for 3, 4, or 5 in a row. Here’s how much each symbol costs:

Bounty hunters are the Hunter wilds, which may be considered as any other symbol, even as the sheriff badge, and the scatter symbols.

In the Deadwood slots, there are four rows of stacked “hunting wilds.” They may be nudged from the margins of the reels to become completely visible on the screen, and they appear on the second, third, and fourth reels. The multipliers for the wilds will rise with each spot they nudge, up to a maximum of 4x each. If there are several hunter wild multipliers, they are summed together.

The Shout Out feature is triggered when two sheriff badges appear on the first and fifth reels. This will provide you 10 free spins in the Shoot Out Gunslinger Spins or Shoot Out Hunter Spins mode, whichever you like. This also implies that on the three middle reels, all low-value symbols behave as wilds.

The free spins round is triggered by three scatters. You may choose between the Gunslinger and the Hunter bonus, and you’ll get eight spins in each:

What is the RTP rate in Deadwood?

Deadwood is a high volatility online slot with an RTP of 96.03 percent. It’s a 10/10 on the variance scale, according to Nolimit City, so if you’re on a budget, keep a watch on your balance while pursuing those huge winnings.

Can I play the Deadwood slot for free?

Here at Sloto Games, you may play Deadwood as a free demo slots game. There is no need to deposit or register with any online casinos. You have 10,000 free-play credits to play with, which gives you plenty of time to test out the game’s various extra features.

Is Deadwood well-optimized for mobile gaming?

Yes, the slot is made with HTML-5 technology and is compatible with any device. It will work fine as long as you have a stable internet connection.

What is the highest possible payout on the Deadwood slots?

The greatest win you can get when playing Nolimit City’s Deadwood slots is worth 13,950 times your bet.