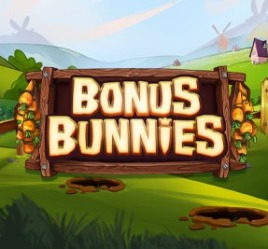 The Bonus Bunnies slot is released by Nolimit City. This game has 4 reels and 30 paylines and offers the maximum prize of 6950x. The slot comes with a re-spin feature and expanding wilds. The game’s RTP is set at 96.14%, and its volatility is medium.

The slot has a cute farm theme, focused on a group of rabbits. The icons appearing on the reels include vegetables such as peas, eggplants, and onions, and the traditional card symbols in a woody design. Bonus Bunnies features a cute and simple soundtrack.

If three bonus symbols appear on the reels simultaneously, the Carrot Link spins round begins. This is a kind of re-spin bonus. While it is not a free spins round, however, it often turns out to be very generous. The player starts the round with three lives. All the bonus icons that triggered the round are replaced with carrot icons with a multiplier attached. As the player spins the reels, more carrots can land on them. For each round that no carrots appear, the player loses a life. Each time a new carrot appears on the reels, the gambler’s lives reset to three.

This round also features three bonus bunnies, each with a special perk:

If the player manages to fill all the spots on the bonus reels, he gets the special key unlocking the chest. This brings a multiplier of 3x, 4x, or 5x to his total prize.

What is the RTP of Bonus Bunnies?

What is the maximum prize I can get when playing Bonus Bunnies?

The biggest prize in this game is 6950x your bet.

What bonus features does the Bonus Bunnies slot have?

This game features expanding wilds and a re-spin feature to boost your winning chances.

Can I play the Bonus Bunnies slot on my smartphone or tablet?

Yes, you can. Nolimit City has taken care of all gamblers and made this slot compatible with mobile devices.