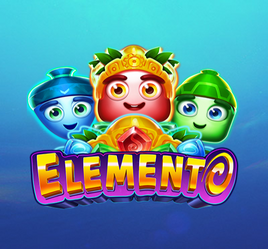 Swedish-based developer Fantasma Games broadens its portfolio with Elemento, an online slot built around the four elements of earth, air, fire, and water. Elemento is Fantasma’s first grid slot, and the studio has made the most of the opportunity by going relatively large. Players benefit from a host of extras such as cluster pays, avalanches, wilds, free spins, plus a progressive multiplier.

Pay symbols sit within a 9×9 inner grid called the Play Area, while modifier symbols sit in the outer ring known as the Element Area, creating a 9×9 sized game. The rest of the screen is unusually plain for Fantasma outside this space. Typically, their games boast rich backgrounds, often fantasy-based, adding depth to the activity taking place on the reels. This time, there’s a more simply designed swirling purple cloud effect. To the left-hand side are four counters, keeping track of the Element Wilds, covered below.

Eight symbols make up the regular pay, divided into four low and four high. Lows are a little green, a big green, a purple, and a red candy-looking symbol. Then there are four cute characters worth up to 6 to 20 times the stake when clusters of 15 or more appear.

Surrounding the main set of symbols is a border called the Element Area. These are empty positions where only element symbols can appear.

At the beginning of each spin, up to 4 random Element Wild symbols will appear in the Element Area. Every time a cascade occurs, the symbols in the area move clockwise in one position.

If one of the wild symbols is involved in a win, it will trigger its corresponding feature:

Then, the wild is removed from the reels and added to the element meter on the left-hand side of the reels. This meter comes into play during the free spins round.

Should you collect one of each element in the meter on the side of the reels, you’ll receive 5 free spins. Then, additional free spins are added for each element symbol you’ve collected during the base game.

During the free spins round, whenever an avalanche occurs, your win multiplier would increase by 1. A maximum multiplier of 99x is available in this bonus.

On the whole, Fantasma has designed a dependable grid slot, and its stats help bear this out. The RTP is decent already at 96.33%, but when activating the feature buy (where available), this rises to the outstanding figure of 97.94%. High volatility suits the gameplay, resulting in stretches of cruising, interspersed by long sequences of winning avalanches. Should the ball really roll, sizeable wins are certainly on the cards.

What is the maximum win in Elemento?

The maximum possible win per spin is 14,000 x your total bet.

How can I get free spins in Elemento?

What is the RTP of this slot?

The return to the player in this slot is 96.33%. This is a fairly average payout percentage in online slots.

What is the volatility of this slot?

Elemento is a highly volatile slot machine. However, its win rate of 44.25% is much higher than other high variance slots.