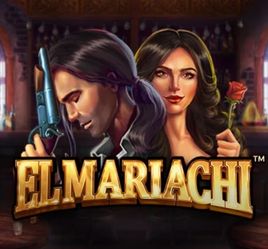 One of the most colorful and unusual Mexican carnivals is dedicated to death. We offer you to get to this strange celebration, which will take place in a slot machine called El Mariachi from the well-known, trusted company Dragon Gaming.

Once the game is launched in the casino of your choice, use the arrow keys or the settings to adjust the bet size. The minimum and maximum bets for El Mariachi are in the currency of the player’s casino account.

This slot machine has a standard 5×3 grid with ten fixed winning lines. It is not possible to modify that number somehow while playing. Thus, there is no way to cheat.

To initiate the game, either press the spin button or select the Auto Spin function, which allows users to spin the reels without constantly intervening. The turbo spin mode is activated when you press the Play button again.

El Mariachi is an action-packed video game with a cinematic theme. It is an enjoyable game with lots of interesting experiences. Five reels, three rows, and ten fixed bet lines make up this slot machine. Along with stunning graphics and designs, the game offers players a variety of features. Wilds, bonus rounds, multipliers, and free spins (FS) are a few features.

The plot revolves around a mariachi, brilliantly portrayed by Antonio Banderas. This guy is striving for vengeance on the cartel leader who murdered his fiance. The grid is set inside the Tarasco bar, where Steve Buscemi plays another American who describes seeing a gunfight in which a Mexican with a guitar case full of guns slaughtered all of the criminals present.

When the bonus round is active, the player’s goal is to collect a large number of bonus icons to advance to the next level. They receive more FS, multipliers, wilds, and the win-both-ways feature as they progress through the levels. To progress through a level, a player must collect four bonus icons. When a user reaches the fifth and final level, they will be awarded three sticky wilds and two additional FS.

There are also nine icons in total. There are low payout icons, which include:

There are high-payout icons, which include:

The wild icon is a guitar case filled with guns, and it can replace all other icons except for the scatters. Winnings are collected from the left to the right side of the reels. It’s a medium volatile game with a 95.5 percent payout percentage. The coin value can range between 0.01 and 0.5.

Is the mobile version of El Mariachi available?

El Mariachi Slot does not support the mobile version, as it is implemented using such technologies as JS and HTML5.

How high is the RTP in El Mariachi?

The theoretical return-to-player (RTP) in this slot game is 95.50%, slightly lower than the market average.

What is the volatility of El Mariachi?

The volatility in this online slot is medium.

What are the special features of El Mariachi?

They include free spins (FS) and a bonus game. To be more specific, those are four mini-games. The wilds, multipliers, and scatters are present as well.

How much should a player bet in El Mariachi?

In this slot, the lowest amount a player should bet to start playing for real money is 0.20 coins, while the highest amount of stake is twenty coins per spin.