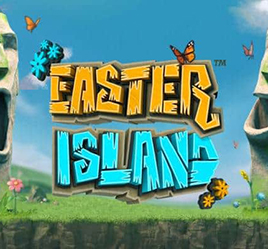 Two statues are placed alongside the reels, interacting with the player during the gameplay, providing a fun and engaging experience. Just like other Yggdrasil releases, this slot features bright and vibrant graphics that make this game even more appealing.

Easter Island features nine regular symbols. The lower-paying icons are the spade, diamond, club, and heart, each paying 5-20x the player’s bet if three to five of a kind land on the reels. Next, there come the higher-paying symbols, each represented by animal totems. If three chameleons land on the reels, they bring the bettor 10x the bet, while five of them provide a 40x win. Three lizards bring the player a 15x win, and five of them bring a 60x win. The player gets 20x for three green frogs and 80x for five green frogs. The fox brings 25x or 100x for three or five of a kind, respectively. The best prize is provided by the red eagle: 125x for three of a kind and 500x for five of a kind.

This slot offers three bonus features that can be triggered while playing Easter Island.

Symbol Swap Re-spin. During this bonus round, all low-paying icons are sucked up and substituted with high-paying ones. Then, the player gets a re-spin.

Although the Easter Island slot comes with no free spins or off-screen bonuses, the player will not actually miss these. The three basic bonus features of this slot are pretty interesting and engaging enough to keep the gambler entertained as he plays.

Can I play the Easter Island slot for free?

Yes, this game can be played in demo mode. However, note that to get real wins, you will have to deposit real money.

Does the Easter Island slot come with free spins?

No, this slot does not include any free spins rounds. However, you can take advantage of re-spins by triggering the symbol swap and expanding reels features.

Is there a downloadable version of Easter Island?

This is an HTML5 slot that can be played directly from the web browser. Therefore, you do not have to download anything to play this game.

What is the RTP of the Easter Island slot?