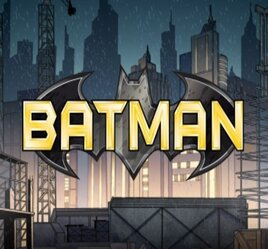 Batman slot is yet another exciting release in a series of games inspired by the DC Universe and its characters depicted in graphic novels. Amaya is one of those software developers that allows players to dive into this fantasy world and forget about reality. The studio has already offered fans of this theme the possibility to enjoy the company of Wonder Woman, and now they have a chance to explore Gotham and help Batman to defeat his eternal enemies.

The provider of this exciting reeled machine is Amaya. It is an experienced software developer from Canada that has been in the gambling world since 2004. Although the majority of its releases are video slots, players can also find a decent selection of table games in its portfolio. Batman slot, as well as other titles by this studio, can be found at more than 50 online operators with a good reputation.

The adventure of Batman unfolds on five reels and four rows. There are 50 paylines to create winning combinations of three or more symbols of the same kind. The size of payouts that one can scoop with the help of such combinations depends on the total stake. It varies from 0.5 to 500 credits per spin, which makes this game suitable for high rollers. The RTP is quite low here, as it is only 92.2%.

Batman’s rivals are ready to pay players from 200 to 2000 credits for the five-of-a-kind combinations. Vehicles and some kind of weapons are worth up to 150 coins for five identical symbols. Those are regular symbols.

As soon as Commissioner Gordon shows up on the first reel and Batsignal is on the fifth reel, or vice versa, the special feature is triggered. Players get three respins with one reel stacked with Wild symbols.

Another special feature is the Descent into Madness, but it can be launched by three Scatters only when the Bonus Bet is activated. This round allows players to help Batman to defeat his enemies. If the fight ends successfully for the superhero, he is ready to share the prize with the players.

What is the developer of the Batman slot?

This game was developed by Amaya, a studio based in Canada that has created casino games since 2004.

What is the RTP in the Batman slot?

What bonuses are available in the Batman game?

Players can trigger respins when Batsignal and Commissioner Gordon are on the reels and activate the Descent into Madness feature if the bonus bet is activated.

What is the reel configuration in the Batman game?

The grid consists of five reels and four rows and has 50 paylines to create winning combinations.