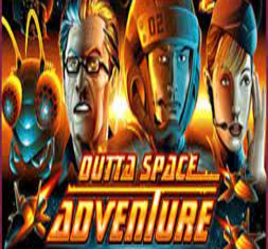 Amaya Gaming is an online casino software developer with one of the most extensive collections of progressive slots. OuttaSpace is one such game title. Being a part of the Movie Mayhem series, it features a multi-level progressive prize with four individual prizes.

The slot has a well-designed theme reminiscent of a Hollywood blockbuster. The game’s characters and background resemble those featured in popular movies like Star Trek and Star Wars. The reels feature the following symbols: the Astronaut, Communications Officer, Asteroids, Spaceships, the Scientist, Aliens, and Planets as the higher-paying ones, and relevantly designed poker card symbols as lower-paying icons.

The male astronaut, or the Hero, acts as a wild symbol in this slot. The player can win up to 6,000 coins by landing five wilds on an active bet line. Besides, the Hero wild symbol can replace all the symbols except the scatter to help create better winning combinations.

The scatter symbol is depicted by the planet that is exploding. If two or more scatters land on the reels, the gambler is awarded a prize of up to 100x his stake (for 5 scatters). Besides, if three or more scatters appear on the screen, the player gets 20 free spins with 2x multipliers for all their payouts.

One more great thing about the Outta Space Adventure slot is that it features a progressive jackpot, which is not triggered by symbol combinations but is awarded randomly, so every gambler has a chance to win big. The lowest progressive jackpot level offers wins worth up to $700, but the huger prize amounts may reach up to $70,000. This slot is linked to several other game titles in this progressive jackpot series, so the prizes climb very quickly.

What is the RTP of the OuttaSpace Adventure slot?

What bonus features are available in the OuttaSpace Adventure slot?

Can I play the OuttaSpace Adventure slot for free?

Yes, you can try it in the demo mode for free. But if you want to win real cash, you will have to create an account at an online casino and make a deposit to switch to the real money version.

Can I play the OuttaSpace Adventure slot on my tablet?

Yes, you can enjoy this slot on any mobile device without the need to download any software.