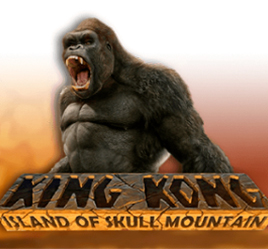 King Kong has featured in multiple spin-offs since the original film was released in 1933. Amaya Gaming has come up with a King Kong: Island of Skull Mountain slot based around this huge ape. The game comes with multiple bonus features and 243 ways to win.

The game has amazing graphics and sounds that keep the user engaged throughout the game. This slot has a dark jungle theme. The game features an explorer and his wife who get lost in the jungle during a treasure hunt. The player’s aim is to save the explorer and his wife from King Kong. The slot’s background features a dark jungle dominated by apes, gorilla totems, cliffs, and streams. The icons include stony letters and numbers, characters’ portraits, and a gorilla. The game’s sounds harmoniously combine with the graphics. The winning combinations are followed by gates exploding and the King Kong logo lighting up.

The user has to first look out for the stony letters and numbers, which are hints to the location of the missing party the player tries to track down. Landing at least three matching icons brings wins. If the player finds the party, he gets awarded up to 2,000 coins for rescuing the explorer, up to 1,500 for rescuing his wife, and up to 1,250 coins for saving the boat captain. If the user wants to get the maximum payout of 2,500 coins, he should also save the entire party from King Kong.

The main drawback of this slot is the single bonus feature which does not bring huge wins since it does not provide any free spins or multipliers. The game features two special icons: the gate and the King Kong logo.

Once the scatter icon lands anywhere on the reels, it gets changed to any other icon aside from the logo and brings a payout. It is a stacked bonus symbol.

The Kind Kong logo is the wild icon that can replace all other icons, improving the chances of landing a winning combination. It appears on reels 2, 3, 4, and 5.

What is the RTP of King Kong: Island of Skull Mountain?

Can I play King Kong: Island of Skull Mountain on my smartphone?

Yes, this game is compatible with mobile devices, so you can enjoy it on your iOS or Android devices.

Should I download any software to play King Kong: Island of Skull Mountain?

No. It is designed in HTML5 technology, meaning it flows smoothly when you play through your browser.

Can I play King Kong: Island of Skull Mountain for free?

Yes, you can try this slot in the demo version before playing for real money.