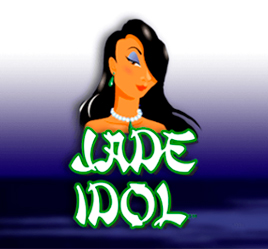 Jade Idol is a 5-reel, 9-payline slot released by Amaya Gaming far in 2005. Given the slot’s release date, it can be called an antique in today’s world of video slots full of bonuses and special features. However, the game still has some interesting features that make it worth playing. It features wild and scatter icons and free spins. Furthermore, it comes with a generous bonus allowing the player to win up to 500x his bet.

This slot is set in the Far East. The theme dominates the entire reels. The background features Asian shops floating on the river near the coast. The themed icons include an Asian lady, scatter skyline, diamonds, ships, Asian hand fans, green monkeys, and Asian lanterns. There are also card symbols in Asian font from A through to 9.

Jade Idol features two special wilds. The kitty wild appears only on the reels 1-4 and can replace all other icons aside from the scatter skyline. To get a big win, the player has to land three matching icons running from left to right. The second wild icon is the green monkey, appearing only on the fifth reel and substituting for all the icons except the scatter one.

The player is awarded a scatter pay if he lands two or more scatter skylines. Each scatter brings the player 100 coins.

If the scatter skyline lands on reel 1, and the green monkey appears on reel 5, the Green Monkey bonus round is triggered. The player is provided with three bonus attempts, and if he manages to match three icons, he is awarded the displayed prize. If the player does not land any matches, he is awarded the consolation prize of 2x the triggering bet. This round can be triggered during free spins. The player can win up to 500x his triggering bet during this round.

What are the special features of the Jade Idol slot?

When was Jade Idol released?

What is the maximum win I can get on the Jade Idol slot?

The maximum win you can get when playing Jade Idol is 500x your bet.

Can I play Jade Idol for real money?

Yes, you can. Make sure to create an account and make a deposit to play in real money mode.