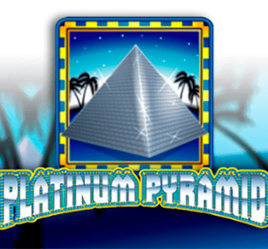 Platinum Pyramid is a 5-reel, 20-payline video slot, offering wild, scatter, and free spins as additional features. Despite its simplicity, this slot machine can be quite profitable and entertaining. Amaya’s Platinum Pyramid Slot is a video slot that was released on May 1, 2006.

Tourists are usually drawn to mysterious pyramids, which is why this online slot game is so popular. It is also about platinum metal, and everything in this casino slot is made of it, which is why the game pays out so generously, attracting more players.

The level of volatility of the Platinum Pyramid is medium-high, with a maximum available win of x7000. The RTP is 94.45%.

Platinum Pyramid is a 5-reel, 3-row slot game with a variety of symbols that bring the fantastic atmosphere of Egypt closer to players. This culture’s traditional symbols, such as an eye, cross, and sphinx, are extremely generous, paying out up to 7000 coins. There is a lovely woman symbol that leads players around and substitutes other symbols in the game to provide more fun.

How to Play Platinum Pyramid

Using the arrows or the setting options, players have to select their bet size. The minimum bet for the Platinum Pyramid slot is 0.01 in one’s casino gaming account currency, and the highest bet is 100.

After that, players must either click spin or select the autospin option, which allows spinning the reels without having to keep an eye on them. Turbo spin mode is activated by hitting play again.

A player is guaranteed a win equal to the face value of the symbols if the same symbols appear in a line on all three reels. In the Platinum Pyramid slot, the maximum number of winning lines is set to 20. And when the most expensive symbols appear on each reel, the player has the option to bet the highest amount of wins.

The wild symbol (Priestess) substitutes for all other symbols and forms winning combos. On the maximum bet, getting two to five wilds on an active payline awards 10 to 7000 coins, bringing the top win for a wild combination to $35,000.

If three, four, or five pyramids appear anywhere in view, the scatter symbol (Platinum Pyramid) triggers 5, 10, or 15 re-triggerable free spins. During the free games, all prizes are tripled. Pyramid symbols also provide scatter winnings when two or more appear on the reels, with the top reward of $15,000 for five of a kind.

Can I Play the Platinum Pyramid Slot for free?

Yes, the slot is available in a demo version too for those who are not willing to risk money.

What is the RTP of Platinum Pyramid?

The return to player percentage of the Platinum Pyramid online slot is 94.45%.

Would I be able to play Platinum Pyramid on my mobile?

Yes, a game can be accessed through any system on any device. It works with no bugs, offering the same quality and graphics.