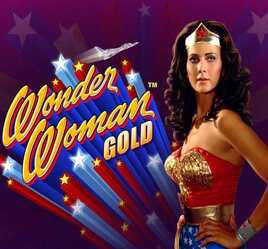 Wonder Woman is a retro-styled slot machine inspired by graphic novels. Thus, you can join one of the most famous characters from the DC Universe as she comes to America to fight with her enemies and rescue the world. All the adventures unfold on a conventional grid full of regular symbols that give payouts and special icons that trigger special features.

The Team Behind It

This game was developed and provided in October 2014 by Amaya. This is one of the most experienced software developers, as it has been creating casino games since 2004. Based in Canada, this is also the most successful studio in that market. It boasts a big game lobby with releases of different types, including table games, classic and video slots. The company also managed to cooperate with a range of popular studios and create its own aggregator platform that has games by such software developers as Next Generation Gaming, Quickspin, and Genesis integrated.

The adventure of Wonder Woman takes place on five reels and four rows located in the foreground of a cityscape. The grid is crossed by up to 50 paylines (their number can be adjusted to the player’s needs). The total stake is also variable. It ranges from 0.01 to 1,000 credits per spin. Such a reel configuration allows users to scoop the maximum reward of 100,000 coins if fortune is on their side. However, the RTP is 95.41%, so it is not an easy task to do.

The paytable in this game is represented by both special symbols and regular icons that reward coin wins.

Regular icons are represented by:

Wonder Woman Free Spins is one of the features that are available in this release. It is triggered when three or more Wilds are in view. A player is given at least 8 free rotations that are played with Wonder Woman Wilds that are randomly added to the grid. Those Wilds stick in their positions for up to five consecutive rotations. Moreover, all winning combinations give doubled rewards during this round.

On top of that, there is The Ares Showdown Feature, but it can be launched only when the Bonus Bet is activated. It is triggered by three Scatters that land on the reels. Ares will attack Wonder Woman three times. If she manages to survive the attack and defeat Ares, he will pay 100x the stake to a player.

What is the theme of Wonder Woman?

This slot transfers players into DC Universe and gives them a chance to meet one of the superheroes.

What bonuses are available in the Wonder Woman slot?

This release by Amaya features free spins and a special The Ares Showdown Feature.

In what way The Ares Showdown Feature is triggered?

It can be launched only when the Bonus Bet with an increased stake value is activated.

What is the RTP in the Wonder Woman game?

The RTP is only 95.41%, which is much lower than the industry standard.