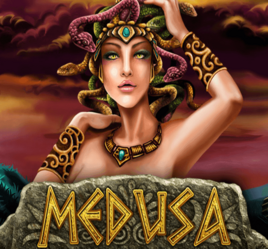 Medusa is a slot perfect for players interested in Greek mythology and mystical creatures. On this page, one can try out this game with a demo version and learn all the information about it. The Medusa slot was developed by a company named NextGen in the year 2011, and it has an impressive design and an interesting theme. Along with that, Medusa provides players with a variety of in-game bonuses and multipliers. The slot’s RTP is 95.4%, which is a bit lower than the average but still enough for a chance to win.

The game is played on five reels and has 25 ways to win. All the paylines are fixed, meaning that there is no opportunity for a player to choose how many of them are activated. All the icons represent recognizable symbols of Ancient Greek culture. For instance, these symbols include an amphora, grapes, a pair of winged shoes, Pegasus, and a temple. The design is rather simple yet effective, with a traditional Agora building and a flower field in the background.

The minimum bet one can set per spin is 0.25 coins, which makes the game a great option for gamblers with a modest budget. The maximum payout one can get is 5,000x one’s stake. Such a high win potential promises players a chance to earn some extra cash while immersing into the story of the monstrous Medusa and her deeds.

If a player manages to land a minimum of three wild symbols represented by Medusa, they will get a bonus of three spins. During this round, all the winnings are multiplied by three. The free spins cannot be re-triggered, but they include an expanding wild symbol placed randomly onto the reels. This icon can bring a player higher payouts.

When one lands three scatter symbols in the form of the game’s logo onto the reels, one gets ten free spins. During the free round, these spins can be re-triggered, and all the payouts are doubled. A player can also unlock a special Super Spins mode, in which all the winnings are multiplied by five.

There are two mini games in the Medusa slot. The first one is activated whenever a player lands a minimum of three Pegasus symbols onto the reels. During this game, one will need to choose one of the two symbols with a chance of winning an additional prize. The second mini game is a classic gamble feature in which one needs to choose the color of a card. This game can be triggered by clicking on the button located below the reels.

What is Medusa’s RTP?

The RTP of the Medusa slot is 95.4%. Such a rating is a bit low for a slot machine, but it is enough for players to get some prizes.

Are there any bonus features in Medusa?

Yes, there are multiple bonuses available in the Medusa slot. One can learn more about each of them on this page.

Is there a gamble feature in Medusa?

Yes, the gamble mini game can be activated with the help of a special button below the reels. The game includes simple guessing of the color of a card a player is shown.

What is the minimum bet in Medusa?

The minimum bet one can set while playing Medusa is 0.25 coins. The maximum bet is not particularly big, meaning this slot is designed for players who like to keep their stakes relatively low.