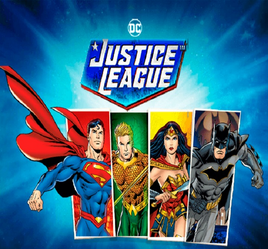 The Justice League video slot allows players to realize the eternal dream of acquiring superpowers, helping the fearless warriors of the light fight for justice. The “heroic” storyline attracts with its eccentricity, forcing the user to watch the action rapidly unfolding on the Justice League slot’s screen.

The slot machine has 5 reels and 25 paylines. The first step before the start of the session is to activate the required number of lines, which directly affects the results of the game. After that, you should assign a bet to each active bet line, choosing from the gradation of 0.01 – 20 game coins. Then, with the start key, the rotation of the reels starts, which allows the formation of prize combinations. It is necessary to build them according to traditional rules: from left to right, from identical chips located continuously. Wild (the whole team of heroes) is only on the three middle reels. It does not bring payouts on its own, but if necessary, it is used instead of other symbols, except for bonus ones. Bonus (Daily Planet logo) is also featured only in the second, third, and fourth columns. When it appears in three columns at once, the player receives a payout in the amount of two total bets, after which the free spins round starts with additional features.

Justice League has several prize options. Team Rescue bonus in any regular spin can turn a randomly selected symbol into Wild Symbol. Super Hero Power-Up bonus is triggered if one hero occupies the entire first reel and there is at least one of his images on the other reels. Further, all these symbols are fixed, the fifth column is also filled with pictures with this character, after which a free spin is launched. If additional elements of the same type appear, they are also “frozen” and the respin begins. When the process is completed, payouts are accrued for all formed combinations. Attack on Metropolis bonus round is 10 free spins with an increased number of Wilds on the reels. It can be extended during the draws. Super Hero Spins bonus begins after the completion of the regular free spins. The first and fifth columns are always occupied by one character, and Wild symbols increase winnings up to x10.

What is the highest payout in Justice League Slot?

For 5 of a kind, the top earning icon only pays out 300 coins. With all Wild winnings throughout the bonus game boosted by up to x10, Super Hero Spins is one of the most lucrative bonus rounds available.

What are the pros of playing the Justice League Slot?

This slot machine is perfect for all gamers thanks to the stable paylines that simplify the gameplay and the wide betting range. The Power Up re-spins are one of many fun and possibly profitable elements.

Where can I play Justice League Slot for free and real money?

At the majority of the casinos we suggest, you can also play the demo version for free. You must create an account in order to play Justice League for actual cash. When you register as a new player, you can furthermore get a wonderful welcome offer.