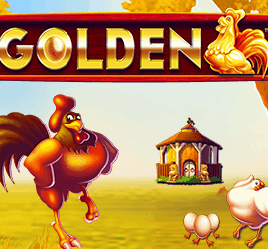 Golden Hen slot is released by Next Gen provider, known for its unique and entertaining slots. Golden Hen has a farm setting and a coop with chickens. This slot features five reels and offers 243 chances to win on every spin. The player can benefit from wild symbols, scatter icons, and free spins. Furthermore, the slot offers a non-progressive jackpot of 2,000 coins.

Theme and Symbols of Golden Hen

The slot is aimed to give off a country feel, and its design matches the idea. In the background, the player can see a farm field and a forest. The reels are colored in vibrant blue, and the icons on them are bright and cartoonish. The symbols include baby chicks, eggs with legs poking out, grown chickens, and the chicken coop. The game also has lower-paying symbols represented by standard poker icons, including K and Q, which have nails popping out of them.

The slot features a wild symbol, represented by the rooster. It only appears on the second, third, and fourth reels. As usual, the wild can replace any other symbol. However, there is one significant difference. The wild can even replace a scatter symbol! This uncommon feature increases the player’s winning chances even more.

The Golden Hen slot also has a scatter icon. A circle with a feather hung on the side is depicted on this icon. The scatter symbol also can land only on the reels second, third, and fourth. It multiplies the player’s wins by a decent coins amount.

If the user is playing a free spin, the wild and scatter symbols combine into one symbol. They can still land on the middle three reels and replace all other icons on the reels. If the player lands three or more scatters, he is awarded ten free games. Five scatter icons in the free game also lead to a 5x multiplier.

Can I play the Golden Hen slot for free?

Yes, you can. The demo version is the best option for beginners since it does not require registration and making deposits. You can enjoy the slot right from your browser with demo coins.

Does the Golden Hen slot feature a jackpot?

Yes! You can benefit from a non-progressive jackpot of 2,000 coins.

Who is the developer of the Golden Hen slot?

Next Gen Gaming released this game for online casinos.

What is the RTP of Golden Hen?