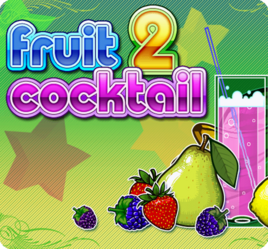 The Fruit Cocktail 2 slot was released by the Igrosoft provider. It features 5 reels and 3 rows and up to 9 paylines that can be adjusted by the user.

Once the gambler launches the slot, he can see that it has been created in the style of a hand-held version of land-based slot machines. Developed with mobile play in mind, this slot has no outstanding graphics. However, fans of retro games will probably like it.

As is obvious from the game’s name, it features lots of fruits and cocktails on the reels. There are also some special symbols like the wild Joker, the Cocktail bonus, and the Free Games icon. The two icons only unlock special features and rewards without payouts. If the player lands three, four, or five wilds, he is awarded 100, 500, or 2,000 coins, respectively.

The highest-paying icon is a grape bunch, which brings a player 200, 1,000, or 5,000 coins for landing three, four, or five-of-a-kind, respectively. Next comes the orange symbol, bringing the player 30, 100, or 500 coins for three, four, or five icons. The apple icon awards up to 200 coins, the banana brings up to 100 coins, and the pear offers up to 50 coins for a winning combination. The lemon brings the player up to 20 coins, and the watermelon awards up to 10 coins.

The Fruit Cocktail 2 slot has some exciting bonus features to offer. There is a Joker wild symbol, which can substitute for any other icon aside from the bonus icon and the grapes symbol, helping to land a winning combination.

Every time a winning combination appears on the reels, the gambler can choose to risk his winnings with the gamble feature. He is shown one card and is asked to open one out of four other cards. If his card has a higher value than the open one, he gets double his win. If it has a lower value, he loses it all. If it has the same value, the win does not change at all.

The Fruit Cocktail 2 slot also has the bonus game triggered by landing three, four, or five bonus symbols anywhere on the reels. It is a symbol pair game where different icons surround the three reels and one-row playing area. As the small reel set spins if the icon that the running lamp lands on the reels, the gambler gets a multiplier on his bet value. If the running lamp lands on 0, the game is over.

Furthermore, the slot features a free spins round. If the gambler lands three, four, or five free games icons, he gets 10, 20, or 50 free spins.

What is the RTP and volatility of Fruit Cocktail 2?

The slot’s RTP is not indicated by the developer, while the volatility is set at medium.

Should I download the Fruit Cocktail 2 slot on my smartphone?

No, there is no need to download anything on your device. The game is designed to launch directly in the browser.

Can I play the Fruit Cocktail 2 slot for free?

Yes, the demo version of this game is available at the best online casinos.

Can I win real cash when playing Fruit Cocktail 2?

Yes, you can. Make sure to sign up for an account and make a deposit to play for real money.