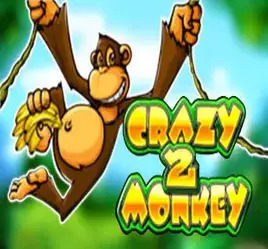 The Crazy Monkey 2 online slot was released by Igrosoft. The game features 5 reels and up to 9 paylines. It is based on the monkey’s adventures and includes wild symbols and bonus games.

The ordinary icons for this online slot are animal-themed. The symbols include the following: mushrooms, butterflies, the game logo, snakes, a banana bunch, a hummingbird and a frog, and two special icons. The wild symbol is represented by the mask of an ancient idol. It replaces all other icons to boost the gambler’s winning chances. Besides, the wild also awards prizes for its own combinations. The bonus symbol features a monkey. It triggers a two-stage bonus game if three or more of-a-kind land anywhere on the reels.

When three or more monkey symbols land anywhere on the reels, a new screen appears, and the bonus game is launched. The gambler can see five ropes hanging down, and the monkey has to pull them down to reveal the prize. Pulling the ropes might release a banana bunch with a prize or an anvil that hits the monkey. If the monkey is hit for the second time, the bonus game is over. If it is alive after pulling at all the ropes, the second stage of the game begins. Here, the player has to choose one of two columns hiding an instant prize. If a spider falls from above, the game is over.

There is also a Double or Nothing bonus game in Crazy Monkey 2. It allows a gambler to try to boost his winnings in the main game in a game of risk activated by clicking the Bet button. If the player activates it, an additional screen opens with five playing cards. The first card is face up and belongs to the dealer. The player should choose one of the remaining four cards, which are face down. If the value is greater than the dealer’s card, the gambler’s win amount is doubled, and he can make one more attempt. If, however, the card’s value is lower than the dealer’s, the bonus game ends, and the prize is lost. The player can exit this game by pressing the Start button if he wants to.

Are there any bonus features in the Crazy Monkey 2 slot?

Can I play Crazy Monkey 2 for free?

Yes, you can try it for free in the demo mode. The free game does not require registration or making deposits.

Can I play Crazy Monkey 2 for real money?

Yes. To play for real money, you will have to sign up for an account at a chosen online casino and make a deposit.

Can I play the Crazy Monkey 2 slot on my smartphone?

Yes, this video slot is compatible with mobile devices due to the HTML5 technology. Therefore, you can enjoy it on your mobile phone, tablet, or PC.