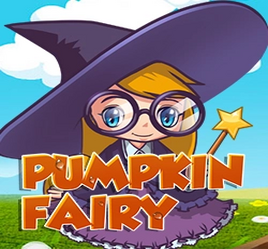 Pumpkin Fairy is an Igrosoft online slot released in 2019. It features 5 reels, 3 rows, and 9 paylines. The game has a cumulative bonus, a risk game feature, and a two-level bonus round.

The slot’s theme is a cute forest fairy or a witch who grows pumpkins. This is what a player can gather from the graphics. The game features music and sound effects that keep the player engaged. Pumpkin Fairy also has some animations appearing when a gambler hits a big win or when he manages to trigger special features.

The highest-paying symbol is the slot’s logo. It pays 200, 1,000, or 5,000 credits if landed three, four, or five times on the reels simultaneously, respectively. The next high-paying icon is Magic Wand, multiplying the initial bet by 100, 500, or 2,000 times. It also represents the wild symbol that can replace any other icons appearing on the reels. The base symbols include a spellbook, a watering can, a crystal ball, a bag, a sorceress hat, and a shovel. The sorceress herself does not appear on the reels, but her figure against the green lawn backdrop is always present under the playing field.

The gambler can activate the risk game on any winning spin. This is a standard gamble feature. Here the player has to choose a card, after which the game chooses a card. If both cards are of the same value, the player gets his bet back. If the gambler’s card has a higher value, his wins get doubled. If his card has a lower value, he loses everything.

If three or more pumpkins land anywhere on the reels, the bonus game begins. The new screen appears with a mini-game. The fairy plants her pumpkins, and if they grow up, the player receives an immediate reward. If all five pumpkins grow up, the gambler proceeds to another bonus game. Here, the player also waters cans in the basic game. If he has enough, the sprouts grow even bigger. Eventually, the fairy is left with one more spell to cast. If successful, the gambler receives multiple pumpkins and huge wins. If not, he at least keeps his wins.

Should I download any software to play the Pumpkin Fairy slot?

No, there is no need to download anything to your PC or mobile device. You can play this online slot right through your browser.

Can I play the Pumpkin Fairy slot for free?

Yes, this slot is available at many online casinos in free demo mode.

Can I play Pumpkin Fairy on my smartphone?

Yes, you can. The HTML5 technology used for creating this online slot makes it fully compatible with mobile devices.