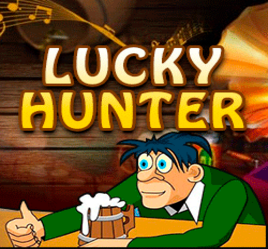 The Lucky Haunter is a tavern-themed online slot machine released by Igrosoft. The slot has 5 reels, 3 rows, and adjustable paylines (up to 9).

This slot features a soft and simple hand-drawn design that is a developer’s signature. The bright colors and well-designed interface make the Lucky Haunter an attractive slot.

The highest-paying symbol is an icon with a cork signed “Lucky Haunter” on it. It can bring wins from 200 to 5,000 credits for three to five symbols landed. The horseshoe symbol brings wins ranging from 100 to 2,000 credits. It is also used as a wild icon, meaning it can substitute for other symbols. Other icons include boiled lobster, decanter, a plate full of shrimps, a beer mug, a beer can, and a bottle. They award a gambler with wins ranging from 2 to 500.

Lucky Haunter features a wild symbol that can substitute for all other icons, aside from the cork, which is the scatter symbol. Besides, it provides a win of up to 2,000 if landed five-of-a-kind.

The Lucky Haunter also features the Risk game, which is started if a gambler lands a win. The player can double wins during this feature. The player has five cards, with one revealed, and has to select another card. If the chosen card has a higher value than the revealed one, the player gets his win multiplied by 2. If it has a lower or equal value, he loses his winnings, or they remain unchanged.

The Lucky Haunter bonus feature gets triggered if the player lands three or more corks anywhere on the reels. A new playing area appears with five covers that the gambler has to turn over. If the gambler gets a bonus under all the covers, he proceeds to the Find a Chicken bonus round. Then, he has to choose between two platters to reveal the prize.

Does the Lucky Haunter slot feature a free spins round?

No, this game does not have any free spins to offer.

What are the bonus features available in the Lucky Haunter slot?

This game features a wild symbol, the Risk game, and the Lucky Haunter bonus feature.

Should I play the Lucky Haunter slot for free or real money?

It is always better to start with a free demo mode to get an idea of what the game has to offer. If you like the Lucky Haunter slot, you can then switch to real money mode. However, note that to gamble for real cash, you will have to register at an online casino and make a deposit there.

Can I play the Lucky Haunter slot on my smartphone?

Yes, you can play it on any mobile device right through your browser, thanks to the HTML5 technology.