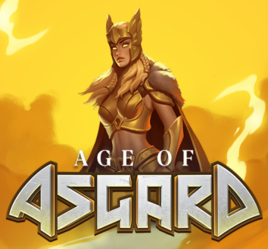 The Age of Asgard: Explore Nordic Mythology and Get Free Spins

Everyone in favor of Norse mythology would probably love Age of Asgard. The Swedish company, Yggdrasil Gaming, has been widely known to many players who prefer to gamble online since 2013.

Check out how well you know the history and myths of Nordic people in the Age of Asgard. In the middle of the gameplay, you can find the three that bind the Nordic cosmos of ancient times. This ground-breaking slot machine consists of forty paylines and five reels. A player can spin away up to two hundred dollars per spin across their preferred device.

So, an eternal fray with a pack of bonuses awaits. Should you try this slot from Yggdrasil Gaming?

Dual Machine Feature: What’s It All About?

Once you enter the fiery battle of Ragnarok from Yggdrasil Gaming, you face this special slot’s feature. The treasure is safeguarded by the brave female warriors. Up to five times three grid is full of prizes. Once good and evil clash, the outcomes are wild symbols and re-spins. Decide on the betting level from 0.20 up to 200 USD or EUR and a spin.

Dual reels allow for dual bonus games and greater chances to win a larger prize. You can play out a clash of the titans after landing wild symbols on the same reels of both sets. In case a player notices 6 symbols of Ragnarok, the sets mix up for twenty additional games. However, only high-value signs are activated in this case.

The wild symbols in this game show up on the three middle reels. The slot possesses a couple of wild symbols, which are monster and female warrior. The second one is actually the female version of Thor. The monster is a demonic dog-creature. The player gets one re-spin whenever the wild symbols, the warrior and monster, take a whole reel in battle.

If all reels are filled with sticky wild symbols, there are two sides to the coin. On the one hand, a player can obtain a Ragnarok Big Win; on the other hand, the re-spin feature will be deactivated.

This is the final special option on the list. To enable it, watch out for the opponent’s wild signs to meet on opposing sides of the single reel. The Clash feature causes a bunch of random 1×1 wild symbols to scatter the grid. Each time the wild symbols appear on high-value signs, the entire stacked symbol is covered by random wilds. It means that a player has a chance to receive higher payouts.

If it’s your first time trying the Age of Asgard, switch to the cashless mode. Practice in a demo version to understand how the slot works and get familiar with all the symbols and special features. Here is how to enjoy the game for free:

What are the different types of gifts that I can obtain?

While playing the Age of Asgard, users can count on such perks as re-spins, clashes, additional spins, etc. They all expand wild symbols and a double-slot mechanic.

How can I obtain some free spins to play the Age of Asgard?

To use more extra spins in this game, land three symbols of additional spins. This will help to activate the so-called Free Spins option. This way, a user can get ten more spins as a gift. Another way to do so is by obtaining three extra spins in the bottom.

What is the RTP in the Age of Asgard?

Currently, the game offers 96.2% RTP, where RTP stands for the return-to-player.

What is the genre of the Age of Asgard?

Unlike many other slot machines on Nordic themes, this title is unique thanks to the fact that it belongs to the video slot category.

What is the best strategy for this slot?

Try setting the slot up to 1,000 spins with the help of the autoplay feature. Make sure that you’re using a relatively small bet size. Another idea is to place the spin speed at max using the Settings tab. There, you can also set a session loss threshold.