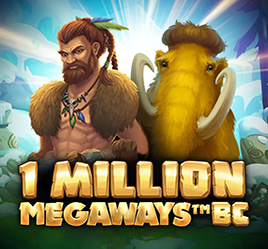 One Million BC Megaways Slot

One Million BC Megaways is an exciting release that allows players to discover the life of human beings thousands of years ago. Mammoths still exist, and they have become the guide to a big treasure for a man and a woman who traveled through time and found themselves in a place with such an intact nature. Players are given a great possibility to witness this unique adventure and even become a part of it.

The Studio Behind This Idea

The reviewed slot saw the daylight in August 2020, when it was released by Iron Dog Studio. It is a popular software provider from the UK that has been in the industry since 2017 providing exciting releases, and many of them boast innovative mechanic. One Million BC Megaways is no exception.

This adventure to prehistoric times takes place on six reels with 2-6 symbol rows. The number of icons on each reel is unique and varies from spin to spin. Players are given from 64 to 117,649 paylines. Such an impressive number of way wins is possible due to the Megaways mechanic that is used in One Million BC Megaways. Moreover, the game has a tumble feature that allows users to have several consecutive wins per single bet.

However, Iron Dog Studio does not just use the mechanic as it has been designed by the BTG, this UK-based software developer adds some changes to it. Thus, one extra reel is added in the free spins mode and the maximum number of paylines gets even bigger.

Reel structure is not the only reason to give this slot a try. It offers players the possibility to get the maximum win of 45,000x the bet and has high volatility. Moreover, the RTP is 96.2%, which is above the industry standard.

The total stake ranges from 0.2 to 20 credits, and it influences the size of coin wins. Thus, depending on the symbol (a man or a woman, animals, or poker cards), players can scoop anywhere between 20x and 140x the total stake for the six-of-a-kind combination.

On top of that, there are two Wild symbols that replace all regular icons on the grid. The regular Wild appears in the base mode, while Sticky Wild lands on the reels in the free spins feature only.

Tumbles are also the key to launching the free spins round. A player needs to have four or more cascading wins to trigger the bonus round. It is played with an additional reel that is added to the center of the grid and always has 7 symbols. This reel increases the number of paylines to up to 1,058,841. Four or more cascades received during free spins reward 2 extra rotations, while the multiplier increases with every locked reel. If the reel becomes locked it has a fixed number of symbols until the end of the feature.

What is the RTP in One Million BC Megaways?

What is the grand prize in One Million BC Megaways?

What is the reel structure in the free spins bonus in One Million BC Megaways?

What other features are available in One Million BC Megaways?

There are increasing multipliers, cascading wins, Sticky Wilds, and locked reels in this slot.