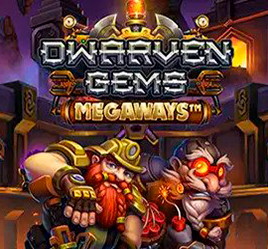 Dwarven Gems is the slot machine that takes legends and myths about dwarfs and their ability to find gemstones and interprets them in an exciting treasure quest that unfolds on the reels. The game boasts an unusual mechanic, big wins, and several engaging bonuses.

The Developer Behind the Game

The reviewed release was launched by Iron Dog Studio in September 2021. This is a popular software developer from the United Kingdom that is a part of the 1×2 Network. Being in the industry since 2017, the studio boasts a big portfolio of games developed in HTML5 and available for mobile play. It has a series of slots that feature Megaways mechanic used under the license of BTG, and the Dwarven Gems Megaways release is one of them.

What is Megaways About?

Megaways mechanic works on the grid with 6 reels and 2-7 symbol rows. The exact number of symbol rows varies from spin to spin, and the same happens with paylines. Thus, players receive a unique gaming experience on every rotation and have a chance to win in 117,649 ways.

This mechanic served only as the base for the reviewed game, so there are certain changes in Dwarven Gems Megaways. There is a special top row that consists of 4 symbols, and players can win in up to 200,704 ways. Moreover, an unusual grid is topped with cascading wins, so there is a possibility to get several winning combinations within one spin.

This unique mechanic used allows players to scoop up to 20,000x the stake, and high volatility can be handy for completing this challenge. It is one of the not many games by Iron Dog Studio with the RTP that ranges from operator to operator. It can be anywhere between 88% and 96.7%.

There is a variety of special symbols that allow players to trigger bonuses in Dwarven Gems Megaways, namely:

At the same time, there are regular icons that give coin wins. Thus, a group of dwarfs, lanterns, sledgehammers, and card icons can pay anywhere between 4x and 50x the stake for the six-of-a-kind combination.

Dwarfs invite players to enter free spins round and try their luck in winning the grand prize. To do that, a user should collect four Scatters on the reels. After that, a random number of free rotations (from 6 to 11) is awarded. Free spins are played with a Power gem that bestows generous prizes to influence the size of rewards and make gaming more thrilling.

How many paylines are there in Dwarven Gems Megaways?

Players can win in 200,704 ways due to the unique reel structure, tumble feature, and a special horizontal row.

What Wilds are available in the Dwarven Gems Megaways slot?

There are regular and Sticky Wilds in this game.

Is there a free spins round in Dwarven Gems Megaways?

Yes, players can receive up to 11 free spins with a chance to win extra rotations.

Can Dwarven Gems Megaways be played on mobile devices?

Yes, the slot is developed with HTML5 technology, so it is compatible with smartphones.