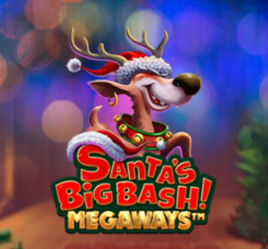 Christmas-themed slots are never out of fashion, so each year software developers extend their collection of holiday-inspired slots with new titles. Iron Dog Studio has also launched one of such releases in November 2021. This is Santa’s Big Bash Megaways, a game that can create a festive mood regardless of the season outside the window.

A cozy house full of kids is already prepared for the visit of Santa. The Christmas tree is decorated, milk and cookies are on the table, and the fireplace lightens the way for Santa to be able to leave presents in a right place. However, this is just a background, and the real fun happens on the grid with an unusual mechanic and big rewards.

What About the Gameplay?

The grid has an unusual structure. There are 6 reels, and the number of symbols on them varies from 2 to 7. It also changes every rotation. The same situation is with paylines, as players can win in up to 117,649 ways, but their number is not fixed. The total stake ranges from 0.10 to 100 coins, and its size is defined by a player.

The size of the bet is important, as it influences the size of rewards. Thus, Santa is the highest-paying character here. It gives 500x the total stake for the six-of-a-kind combination. His helpers, the owner of the house, and a gingerbread cookie give anywhere between 40x and 150x the stake for the maximum winning combination. A poker card gives the smallest rewards that do not exceed 20x the stake.

On top of that, there are several special icons, namely:

Moreover, random reels can become locked and give the same number of symbols until the end of the feature. When this happens, a multiplier is increased by x1.

What is the RTP in Santa’s Big Bash Megaways?

The RTP in this slot ranges from casino to casino, so it is better to find this information in the selected operator before play.

What is the function of Rudie in Santa’s Big Bash Megaways?

This reindeer appears on the reels at random and awards different prizes, including Wilds, respins, and baubles activation.

How to launch the free spins round in Santa’s Big Bash Megaways?

When at least 8 baubles are activated on the Christmas tree, the free spins begin.

Yes, it can be played on portable devices due to HTML5 technology.