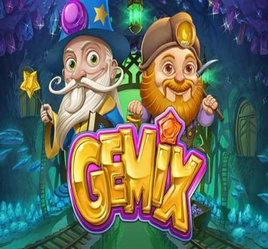 Gemix Online Slot from Play’n’Go: Read a Review and Play for Free

Gemix by Play’n’Go significantly differs from most online slots. It has multiple levels and the game’s objective changes for each one. Besides, it does not use a traditional 5×3 slot structure. Find out the details about this online slot below.

This game has a 7×7 grid. Instead of having traditional paylines, Gemix lets the player win each time when he/she has five same icons touching horizontally or vertically. The stars are the highest-value symbol in this game, while blue rectangles are the lowest-paying ones. While the main objective is to win more than lose, the player’s goal in Gemix is also to advance from one world to the next.

This online slot features three worlds, each with a different theme and wilds:

The wilds become more beneficial as the player progresses through each world. They are basic wilds in the first world and then turn to stacked and sticky wilds in the subsequent ones.

How to advance from one world to the next? Each one has three levels to win, and the player has to beat each level before moving on to the next world. To beat the level, the gambler must collect winning icons in a specific pattern, which appears with blue boxes underneath the icons. Once the player gets a winning combination with one of those blue boxes, it turns orange. Once all of the boxes turn orange, the player advances to the next level. There is a box on the right side of the screen showing parts of the pattern that are already completed and which are still needed.

As it was already mentioned, this game is not like other slots. It does not feature scatter symbols or free spins. However, it offers other types of bonuses.

All the bonuses work with the slot’s cascading reels, which are one of the multiple awesome features. Each time the gambler wins, the winning symbols fall from the screen. The symbols above them fall into their place, creating new combinations, giving the player a chance to win multiple times on a single spin. Each consecutive win adds in the box on the left side of the screen. Besides, they add to the crystal charge meter, which is the blue orb on the top right side of the screen. It resets at the beginning of each spin. If the player manages to collect 20 winning symbols during a single paid spin, the crystal charge bonus is activated. It provides the player with one of the randomly determined bonuses:

If the gambler wins 40 symbols before the crystal charge bonus gets activated, this crystal charge gets supercharged. In this case, all the winnings on that spin get 3x multiplied.

What is the RTP of the Gemix slot?

Can I play Gemix for free?

Yes, you can play the demo version of this slot. However, you cannot win real cash until you switch to real money mode.

What is the maximum win I can get from Gemix?

The maximum win is 6,025x your total stake on a single spin.

Can I play Gemix on my smartphone?

Yes, Gemix is completely mobile-optimized so that you can enjoy it on your smartphone or tablet.

Is Gemix a reliable online slot?

Yes, this game is scam-free as long as you play on a reliable online casino. To determine if the website is a safe place to play on, you should check its license that can usually be found at the bottom of the main page.