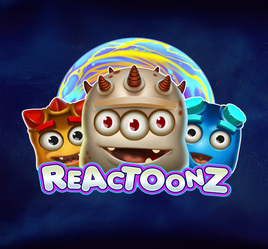 Reactoonz is a unique alien-themed slot with 3D graphics and a cute design. This is a cascading game, which means gamblers can win multiple times in a row as the grid fills with new icons. Each win adds points to a special meter. Once the meter is charged, it activates one out of five random Quantum bonuses, making the playing more rewarding. Reactoonz is a highly volatile slot that can pay out up to 4,570x stake.

This slot has a 7×7 grid filled with various animated symbols and characters. The action takes place in an intergalactic location that combines features of a state-of-the-art spaceship and a scientific laboratory.

Animated aliens add to a specific atmosphere which is both entertaining and enchanting. The creatures smile, chat, blink at each other and look around whenever the gamer takes some time to figure out their next step.

The vivid-colored grid takes the main part of the screen, while on the left side, there is a Quantum meter, and in the background, there is a dark-blue galactic sky.

All of the factors above make Reactoonz design really stand out among other online slots. Still, the graphics are not the most important part of playing for gamblers.

Wager limits and Return to Player rate are important for a gamer to learn before starting playing a new slot. These indicate if the game is more suitable for low- or high-rollers. The minimum bet in Reactoonz is £20, whereas the highest possible stake is £100. Reactoonz has a respectable RTP of 96.51% and is highly volatile, rated at 10/10 by the developer, Play’n GO. Therefore, Reactoonz is more likely to pay out regular small bets, but big wins are relatively high.

Common Wild symbols land onto the reels randomly during a spin, but in Reactoonz, this feature functions a little bit differently. The Wild symbol in this slot is presented in a form of yellow light or a whirl and needs to be generated before it activates a bonus. With every spin, a random one-eyed icon starts glowing. If it becomes a part of a winning combination, it will turn into two Wilds in the following round. The Quantum meter also generates Wilds which increase in number with every further spin and make the game process more rewarding.

As Reactoonz is a cascading slot, bonus symbols disappear from the grid if they make a winning combination. This combination is then evaluated and a particular amount of points are added to the Reactoonz Meter on the left of the screen. When the number of collected points reaches 25, they move to the other side where the Quantum Meter takes place. These points then activate one of the Reel Modifiers:

Implosion transforms a random number of symbols on the grid into Wilds. This creates a winning potential but removes the symbols which were previously on these places.

Incision places a Wild symbol in the very center of the 7×7 grid, and it also adds matching icons across the diagonal lines.

Alternation changes one of the one-eyed alien icons into a higher-valued symbol.

Demolition removes all one-eyed symbols and matching icons from the screen. This leads to a load of new symbols falling onto the grid, which can lead to a winning combination.

Once all the features above have already finished their action and the Quantum meter is completely full one more time, the Gargantoon bonus is activated. If it triggers a winning combination, it then turns into two 2×2 symbols. This feature continues until the Gargantoon transforms into nine separate Wilds.

What is the RTP and volatility of Reactoonz?

Reactoonz has an RTP of 96.51%, which is above average. The volatility of this slot is rated as high.

Does Reactoonz have a free spins feature?

No, it does not. Still, it has a unique bonus system that significantly improves one’s chances of winning.

What is the maximum win in Reactoonz?

The maximum win is 4,570x stake. Since the game is highly volatile, it is more likely that many smaller wins will pay out.

What are the minimum and maximum bets in Reactoonz?

The minimum wager is £20, whereas the maximum possible stake is £100.