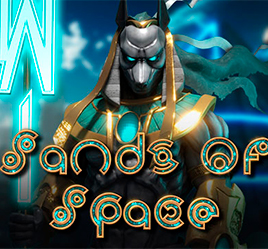 Sands of Space, a Genii slot, turns the Ancient Egyptian theme upside down by mixing in a splash of science fiction. The slot reels are set against a dark yellow background that resembles sand.

The slot has 5 reels and 3 rows, with a total of 20 paylines. The paylines pay out in order from left to right, and if several paylines are hit in a single play, the payouts of each payline are added together.

The minimum bet is €0.20, making this a low-stake game. Meanwhile, the maximum wager is €25.0. The slot offers an auto-spin feature.

While smartphone players will find the game to be highly straightforward and comfortable, PC users may be forced to deal with a vertical screen since the game was primarily designed for mobile screens.

Symbols at Sands of Space

Scarabs, jackals, and cats are among the symbols of the Sands of Space slot. The card symbols J, Q, K, and A in hieroglyphic style are the low-value symbols in the game, followed by a purple Jackal vase, green bottles, a floating metal sphere, a red urn, a metallic scarab, and a black and gold cat statue.

There are two beneficial bonus features Sands of Space offers. The first one is the Wild Double High, where the wild symbol replaces any other symbol in the game. The second one is a Feature Game.

The Feature Game is triggered when three or more Feature Scatter symbols appear at the end of the spin. On the screen, there are several objects to choose from, and players can pick one or more. Each provides a cash prize at random. The payouts can be up to 21,500x, depending on the duration of the feature game.

What is the RTP of the Sands of Space slot?

What is the highest-paying symbol at Sands of Space?

A 500x payoff from five of the Cat symbol is the largest reward the slot offers.

How to activate the Feature Game at Sands of Space?

The Feature Game can be easily activated when three or more Feature Scatter symbols land on the reels at the end of a spin.