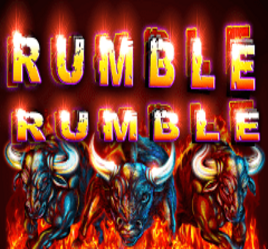 It gets hot every time Rumble Rumble is played! This is the slot that focuses on three bulls that seem to come from hell itself. They are sniffing for big wins over the grid that is wrapped in fire flames ready to swallow the grid at any moment. Players who spin the reels need to collect all winning combinations until they have time, and those furious bulls are very helpful, as they turn many symbols Wild.

The Developer Behind This Slot

The game was rolled out in 2014, and it is well-adapted for mobile play. At the same time, players can face some inconveniences if they decide to spin the reels on desktop. Ainsworth Game Technology, a popular Australia-based software provider, stands behind Rumble Rumble. This company has been in the industry since 2004, and it has already opened offices across the globe, including the UK, Colombia, and the United States. It focuses on the development of reeled machines for online casinos and land-based gaming machines.

How to Play Rumble Rumble?

The grid in this game is a quite common one. It consists of five reels and three symbol rows. However, there is a surprising number of paylines, as 100 betlines are rarely available on a 5×5 grid. The total stake ranges from 0.01 to 100 credits per line, so Rumble Rumble is suitable for high rollers. Volatility is medium here, but the RTP is significantly below average. It is only 94.08%.

So, how to start playing? Just set the total bet and press the “Play” button to make the reels spin and see if any winning combinations are created.

The Fire Wild that is created when a bull lands in a fire square on the reels. That is when the bull itself and all adjacent icons will turn into Wilds. If those special icons cover the entire reel, the Wild transforms into an Expanding Wild.

The gold coin is both Wild and Scatter. It performs the functions of substitution and bonus launch and gives a payout of up to 100x the total stake.

At the same time, players can scoop regular wins with the help of stone sculptures, different wild animals, and poker cards. They pay anywhere between 0.05 and 0.25 credits per spin for the five-of-a-kind combination.

Aside from the abovementioned Fire Bull Feature, there are 8 free spins that are triggered by three Scatters. They are played on a grid with a configuration of 5×9. Bull can land on three top positions on reels 2 and 4, while coins appear on three top potions of all reels. There is a chance to win 5 extra spins when two or more Scatters are in view.

What is the RTP in the Rumble Rumble slot?

The theoretical return to a player is only 94.08%, and the variance is medium here. Thus, payouts are not very big in this game.

What is the main symbol in Rumble Rumble?

The main character in this game by Ainsworth is the bull, as it can land on the grid and convert a bunch of symbols into Wilds.

Are there any other bonuses in the Rumble Rumble slot?

Yes, players can also trigger the free spins feature that is played on five reels with nine symbol rows.

Can Rumble Rumble be played on desktop?

Being created as the mobile-first game, this slot is better to play on mobile, but it is available on desktop as well.