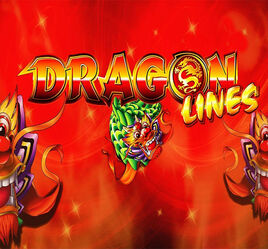 The Dragon Lines slot was developed by Australia-based gaming company Ainsworth. It is a properly structured, well-designed game where each detail was considered. Dragon Lines slot machine offers 5 reels, 100 paylines, while the maximum wager per spin is 75 euros.

There are no bonus rounds offered. However, this slot provides a free games feature, which reflects in 10 complimentary spins.

The main symbol of the game is the Chinese dragon taken from carnival celebrations. The visuals of the slot are colorful and bright. Among other symbols featured are fire-crackers, a golden urn, lantern and traditional drum, coin.

Any slot machine has a significant number of buttons a user can select while playing. As for the Dragon Lines, here are some of them briefly explained:

If a player wants to increase the number of paylines, this button should be pressed on. Take into account that the maximum number of lines is 100.

This button should be used in order to decrease the number of paylines a player is wagering on. The minimum number to be selected is 1.

This will increase the size of a player’s wager.

If one wants to decrease the size of the wager, this button should be used.

This button starts a new round of the game, setting the reels in motion. When the game is in process, and the reels are spinning, this button turns into a stop one.

If playing for real money, this button will allow a player to see own history of the gaming sessions.

There are many Chinese symbols used in this game. All of them have their meaning and correspond differently at the pay table. Here are some of them described.

It is always associated with good luck and power in Chinese mythology. Dragon, in the game, substitutes all symbols except the scatter. That is why all payouts with the dragon symbol can vary depending on other symbols in a winning combination.

In Chinese philosophy, this symbol demonstrates how forces rely on one another. At Dragon Lines, Yin Yang is a scatter symbol that pays out 100 euros for 5 matches, 10 euros for 4 matches, and 2 euros for 3 matches.

These ingots were used as currency in China until the 20th century. At the slot, this symbol pays 10 euros for 5 matches, one euro for 4 matches, and 0.50 euros for three matches.

They are now used as currency, in addition to being a symbol of prosperity and health. At Dragon Lines, this symbol usually pays 3 euros for 5 matches, 1 for four matches, and 0.50 euros for three matches.

China is well-known all over the globe for being the largest manufacturer of fireworks. No wonder this symbol is also used at the slot. It pays 1.50 euros for five matches, 0.50 euros for four matches, and 0.05 euros for three matches.

Yin Yang symbols act as scatters at Dragon Lines game. If a player gets three or more of these symbols, one will get 10 free games. This feature also allows getting a dragon icon on all the reels.

If three or more Yin Yang symbols appear again during the free spins, there will be a reward of additional five spins.

What is the return percentage at Dragon Lines?

The RTP of the slot is 94.30%. It is not the highest level on the market, but still worth trying, taking into account the same itself.

How many paylines does the slot offer?

Yes, but not every online casino allows depositing with cryptocurrency. You might need to search for one that does and offers Dragon Lines game.

What happens if there are two wins on the same line?

If this occurs, a player is getting only the highest win. Wins cannot be combined.