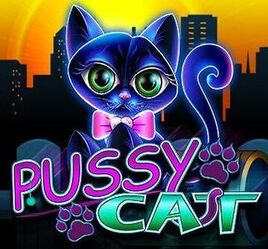 Pussy Cat is one of the futuristic releases that allow players to dive into the world of technology, robots, and artificial intelligence. Characters that are present on the grid are made of metal, and they create generous winning combinations for their visitors. The most fortunate ones can scoop one of the jackpots and enjoy a bonus round.

Pussy Cat is a slot machine developed and provided by Ainsworth in 2019. Thus, this is quite a modern release with a theme and visuals that are very popular nowadays. The futuristic panorama of a big city and robotic characters give a special vibe to a game that could have been just another release inspired by cute cats and their leisure. So, what does the future has for furry friends?

Pussy cat tries to catch a robotic mouse on five reels with three rows. There are 25 paylines, but their number can be adjusted to a player’s needs. Another thing that can be selected by a player in this game is the total stake. It can be anywhere between 1 and 40 credits per rotation.

The volatility is medium here, and the RTP is below average (only 94.16%). However, such technical characteristics are typical of many slots by Ainsworth.

Gold Fish is the Wild symbol. It does not give payouts, but it can replace all regular icons on the grid. In the bonus round, Silver Fish appears along with Gold Fish. Another special symbol is the paw. It is a Scatter that triggers the bonus round and pays up to 50x the stake for the five-of-a-kind combination.

If to speak about regular icons, those are mouse, cat, toys, and poker cards. These symbols pay anywhere between 2x and 8x the total bet for five identical pictograms.

Players who collect three Scatters have a chance to play free spins round. This bonus is played with two Wilds, and they have random multipliers of x1-x6. If two Scatters land on reels 1 and 5 during the feature, extra spins are awarded. Moreover, the free spins round gives a possibility to trigger one of four jackpots. This happens when the entire grid is filled with Gold Fish. The higher the bet is, the better chances to see the fish invade the reels and bestow the jackpot prize.

It is not an easy task to trigger free rotations, so the provider integrates the Second Chance Respin feature. It is activated when two Scatters are in view. Reels that feature the Scatter are frozen, while all other reels spin for a chance to get a third Scatter.

When was Pussy Cat launched?

That slot by Ainsworth appeared at online casinos in March 2019.

What special features are offered to players in Pussy Cat slot?

There are two Wilds, free spins with a chance to win a jackpot prize, and Second Chance Respin to increase the probability of triggering free rotations.

What is a possible bet in the Pussy Cat game?

The total bet varies from 1 to 40 credits per spin.

Are there any multipliers in the Pussy Cat slot?

Players can have Wilds with multipliers of up to x6 in the free spins round.