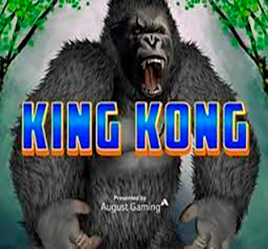 King Kong Slot: A Short Review of a Movie-based Slot

King Kong is a slot machine based on the story of the famous movie about a giant monkey. The wins, which promises this slot provided by August Gaming, can also be called gigantic. For each spin, you can get payouts with odds of up to 3000. The slot has a wild symbol, scatter, and several bonus rounds. What’s more, King Kong is played on a 3×5 game board with 243 active paylines that are always active.

As soon as the player starts playing this game, he will be transferred into an off-map jungle with the only aim – to look for fresh fruits to attract this enormous animal. When King Kong is not hungry and angry anymore – the player will receive exciting King Kong bonus features worth a lot of coins.

The Look of the Game

The look of the game has been taken from a cartoon, it seems, and the theme has been located in a dense jungle area that hides all kinds of creatures in its lush vegetation. It is not surprising that such a massive ape as King Kong has found refuge here. The reels have a golden frame and the game logo is visible just over them, where the letters are highlighted in blue.

Obviously, many players are scared to play King Kong for real money. In this case, it’s possible to try out a free version with no downloading needed. For the courageous players who prefer to play for real money, there are 12 betting options to make a choice. Starting with a low limit of just 0.25 credits, they go all the way up to a maximum bet of 2,500 credits.

As for the bonuses, there are no standard features such as King Kong free spins in this August Gaming release. But the modes available are unique and worthy enough to boost your experience and your winnings. The reels spin in a Toppling fashion. So the symbols involved in a winning combo will disappear. The remaining symbols on the reels will fall accordingly, leaving space for new symbols to fall down from above. With this mechanism, there is always the possibility of getting more than one win per spin.

If no more wins are possible, the Angry King Kong is activated. The half and full gorillas scream and make the symbols disappear one and two positions away from them in that order. Then, new icons will fall from above, and the drag reels will be activated again.

How high is the Return to Player in King Kong?

The theoretical Return to Player percentage of the King Kong machine is 95.50% which is higher than the 95% online slots average.

What are the maximum and the minimum bet in King Kong Slot?

How high is the hit frequency rate in King Kong?

The hit frequency rate is 29.29%, or in other words –  almost every third spin will result in a win for a player.

Is there a possibility to multiply the payouts?

Unfortunately, multiplier is not available in King Kong Slot.