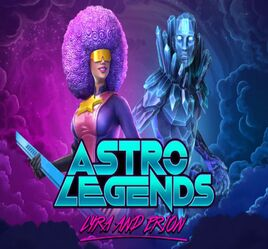 Astro Legends by Foxium is a modern online slot devoted to the space age popstar that tries to save the galaxy. It involves ski-fi symbols, bonus features, and quick payouts. Moreover, players can start the gameplay for free and for real money. The latter offers a winning potential of 96.63%.

A visually compelling theme of Astro Legends is represented through 3D graphics. The modern slot consists of colorful elements. This includes the well-animated moon and purple skies in the background. Triangular reels involve 22 positions where symbols could form winning combinations.

Players aim to save the galaxy with the smartest character and antagonist, Lyra. She gives an opportunity to collect up to 150, 000x the initial stake. The game incorporates main features such as multipliers, respins, and wilds. On top of that, players have to face an RTP of 96.63%.

Astro Legends feature six standard symbols. All of them promise some unique features.

How to Play Astro Legends?

When it comes to Astro Legends, players aim to defeat Erion, the cunning monster. As Lyra, players should complete the mission in order to gain the multipliers, bonuses, and respins.

Before starting the game, players have to place a bet from $0.10 to $100. The rest becomes clear after spinning the reel and getting symbols landed on the reels.

How to launch Astro Legends Slot?

Players can use a desktop computer, a tablet, or a mobile phone to start the given slot. Moreover, they can play the game via a downloaded app or a standard browser.

Where to find Astro Legends Slot?

What is the most common multiplier feature in Astro Legends?

Players can get a multiplier of 15x after landing multiplier wild symbols and putting them together.

Yes, it is. Many online casinos offer the slot in demo mode. So players start playing the game without making a deposit.