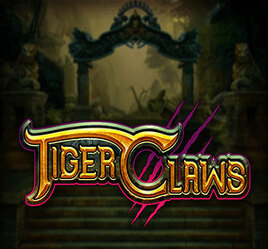 Tiger Claws is a slot game developed by Kalamba Games. It features five reels, 243 ways to win, free spins, multipliers, and split symbols. The slot has an RTP of 96.33% and high volatility.

The slot game is all about wild cats. The mysterious background features two lit torches and reminds of a glamping tent somewhere in Africa. The reels are dark-colored, allowing the visuals of big wild cats to stand out. The lower-paying symbols are standard playing card symbols. The high-paying icons include a tiger, a leopard, a silver tiger, and a panther. The tiger eye is a scatter, and the symbol with the word “WILD” is a wild icon.

The game also features the panther, leopard, and tiger icons, each with an identical partner and a 2x symbol. They act as two symbols on the reels, enhancing the player’s winning chances.

What is the RTP and volatility of the Tiger Claws slot?

What bonus features can I expect when playing the Tiger Claws slot?

When playing this game, you can expect regular wild symbols, WILD 2x symbols that multiply your wins by 2, free spins, identical 2x symbols that count as two icons on the reels, and a progressive jackpot feature.

Can I win real money in the Tiger Claws slot?

Yes, you can. To try your luck, you will have to register at an online casino and make a real money deposit. Then, choose the real money version of the Tiger Claws slot and start playing.

Can I play the Tiger Claws slot on my smartphone?

Sure, you can play this game on your smartphone or tablet since it is fully mobile-optimized.