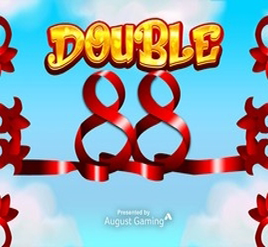 Double 88 Slot by August Gaming: All Basics in Comprehensive Review

Double 88 is an online slot developed by one of the most prominent software developers August Gaming. The slot has an Asian theme, offering an interesting twist to the three rows of five reels. Double 88 comes with 25 paylines, having double symbols that make them pay twice when these symbols are landed on one of the paylines.

Graphics and Themes of Double 88

The Double 88 slot is a game with a vaguely Eastern-Asian style and a variety of winning options. The design of the slot is mostly performed in light accents. The background is red with a floral style, and the gold-lined reels are adorned with slot’ symbols. The look is completed with lotus flowers, flames, and gold coins. Strings, flutes, and gongs make up the music that adds to the atmosphere.

How to Play Double 88

Double 88 has a typical video slot layout. There are five reels, three lines, and twenty-five fixed paylines in this game. To change a total bet, a player can adjust both the bet level and the denomination of the stake. There are also a few customization features available. For instance, the autoplay feature. It keeps the spins running until stopped by a player. If players wish to have faster gameplay, they could activate a Turbospin feature.

Double 88 provides an easy-to-understand interface, so it will not be difficult for players to get on well with the slot. Under the reels, there is a row of buttons and displays. All of them are clearly labeled.

To start the game, these steps should be followed:

Double symbols make this slot unique. These symbols are similar to regular card symbols, except that the image appears twice in a single spot and pays twice as much.

The clock-shaped Scatter also activates the free games function at Double 88. If a player gets three of these, 12 free spins are provided. All Wilds in winning lines will pay as double symbols during the bonus round.

What is the largest possible win on Double 88?

Can I play Double 88 for free?

Yes, the slot is available in a demo version with no risk, as well as players can play it for real money.

Is Double 88 compatible with mobile phones?

Absolutely yes! The slot can be accessed from any device, such as a tablet, mobile phone, laptop, or computer.