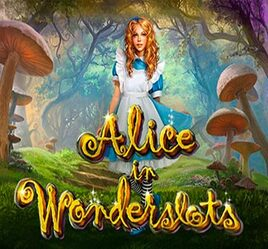 Alice in Wonderslots: Magical Ticket for a Dreamlike Win

Lately, it seems extremely hard for people to believe in magic, especially in a modern world, where everything out of the ordinary or supernatural can be explained with facts or theories. Developers at Playson set their minds to change that and worked hard to create a slot that will take its players on a journey far away from troubles and worries. Just like Lewis Caroll did back in the day, releasing a story about a girl Alice who slipped through the hole to a fascinating land, full of unbelievable things and creatures, like Mad Hatter or Cheshire Cat. That’s how Alice in Wonderslots was born, but this time, players can get paid real money for uncovering the treasures of a mysterious land.

Based upon the famous fairytale, Alice in Wonderslots took in the main theme, along with characters that were turned into icons. Apart from the standard for most online slots low-value symbols J, Q, K, A and above mentioned Mad Hatter and Cheshire Cat, one can witness Doormouse, March Hare, Queen of Hearts and Alice herself. The graphics are very colorful and bright, and the design is true to the original story. Playson definitely nailed the ‘wow’ effect here, making Alice in Wonderslots a slot everyone needs to try.

Basics of Alice in Wonderslots

Alice in Wonderslots has a 5-reel and 4-row style with 20 active paylines available. The minimum bet is only $0.20 and it goes up to $5. By tweaking the coin value, one can increase the maximum wager to $100.

The rules are simple and the user interface is straightforward, meaning players can jump straight into spinning the reels, with no extra instructions or complex guides.

There are a few main bonus symbols to look for:

On top of the bonus symbols that can appear on the reels, there is also a Gamble button at the bottom of the screen for those who are ready to risk it all to get their win doubled. When activated, a dealer reveals a card, and a player has to make a choice among four face-down cards, aiming to choose one with a higher value to get a 2x multiplier of the win. However, in case of defeat, one can either lose everything, including the previous win or keep the money and walk away with the same amount as before.

What is the return to player percentage of the slot?

Alice in Wonderslots offers 95.21%. No doubt, there are lots of virtual slots with higher RTP out there, but the creativity and high volatility definitely make it worth a try.

Is there a progressive jackpot available?

Even though there is no progressive jackpot available in Alice in Wonderslots, gamblers can still walk out with high payouts without any bonus features. For example, a White Rabbit icon alone pays 3,000 within a base game.

Can Alice in Wonderslots be played on a smartphone?

Yes, developers at Playson made sure players can equally enjoy the slot on desktops and mobile devices.

Is there autoplay available?

Yes, players can hit the button and preselect a fixed number of automated spins in Alice in Wonderslots. Then, one can sit back and collect rewards, watching the reels set in motion.