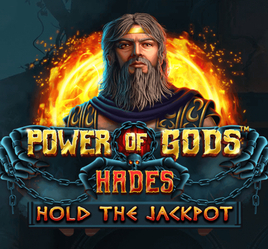 Power of Gods: Hades is one of the recent additions to the Power of Gods series from Wazdan Studio. The slot with the Ancient Greece theme features 5 reels, 3 rows, and 243 ways to win the game. The stakes are always high as you play for the rewards hidden inside. In fact, you can win up to 3,000x your bet if you hit the grand jackpot.

Power of Gods: Hades is a relatively new slot in the gaming market. And it looks promising. So, start fighting for big wins by spinning the reels.

Wazdan is one of the top software developers in the industry. Just take a look at the visual design of Power of Gods: Hades slot. Its visual concept is devoted to the Greek theme, while the gameplay is set in the underworld. This finds a direct reflection on the dark and brooding graphics. Each time you spin the reels, you will find a lot of bones and skulls on your way.

The music background has a great vibe. All the visual effects are working alongside the soundtrack.

The animation of Power of Gods: Hades slot is filled with various symbols. These are multiple elements associated with Greek culture.

Power of Gods: Hades slot has a wide range of features. The Sticky Bonus elements are the most profitable as they let you enter the Jackpot round easily. Then, you will be able to collect five elements in the slot game:

When 6 or more symbols land on the reels, you get a guaranteed jackpot along with 3 free respins. The maximum win can get as high as 3,000x your bet.

The Hold the Jackpot Feature can be activated with sticky bonus symbols. All of them increase the winning potential.

While playing Power of Gods: Hades, you should cross the Styx River and enter the Underworld. This is where you have a chance to win a jackpot.

To start the gameplay, you will need to place a bet between $0.10 and $100.00 per spin. Once you spin the reel, you should try to land a winning combination. Depending on the symbols landed on the reels, you will get a win or fail in the game. With the average RTP of 96.14% and variable volatility, your winning potential turns out to be really high.

Is Power of Gods: Hades slot available for free?

Yes, it is. Some online casinos offer the slot in a free mode. Thus, you can spin the reels and check out the gameplay without spending a single dollar.

How much can I bet per spin?

Can I play Power of Gods: Hades slot on my smartphone?

Yes, you can. The slot is compatible with all mobile devices, featuring Android, iOS and other platforms. Whether you play on your smartphone or PC, you will have the same range of features and services at your disposal.