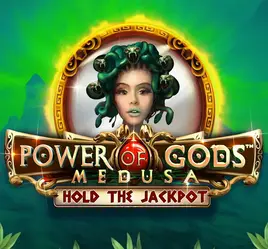 Power of Gods: Medusa Slot is a perfect adventure for mythology fans. It comes with a relatively simple yet convenient setup of 5 reels, 3 rows, and 10 paylines.

Power of Gods: Medusa Slot is based on a modern concept that allows players to choose the volatility level of the bonus round. This makes the gameplay more involving. Let us explain the details!

Power of Gods: Medusa is devoted to the ancient world. The slot idea is based on the myths that have reached us over the centuries. Throughout the gameplay, players face gods and heroes of Greece.

The gaming vision of Ancient Greece came from Wazdan developers. They integrated high-end graphics and vivid animation into the slot. This made the visual design incredibly interesting and engaging. Generally, the game is equipped with a Hold the Jackpot mechanic, which allows you to collect symbols and make respins while claiming the best rewards.

The Medusa Wild Symbol is used to bring smaller wins more often. It can also be used to replace other symbols and build up winning combinations.

Hold the Jackpot is the main bonus feature offered by Power of Gods: Medusa. It involves more than six bonus symbols. They can activate a feature that brings 3 respins.

Once you start respinning the reels, you will get additional bonus symbols which become sticky. They reset the number of remaining respins.

Generally, there are standard modifiers that help you activate various bonuses and rewards. Each of them has separate functionality:

For each feature, you receive up to 15x the bet and get the right to claim smaller fixed jackpots (Mini, Minor, and Major). By claiming the Grand Jackpot, you can get 2,000x the bet if all 15 bonus symbols settle down together.

To start the gameplay, you will need to place a bet between $0.10 and $10,000.00 per spin. You will also have a chance to select your own level of volatility (Low, Medium, or High). Once you spin the reel, you will need to form a winning combination by matching symbols on connected reels. All symbols come up with individual value. So, your final win depends on what you get on the reels.

Can I earn real money in Power of Gods Medusa?

Can I play Power of Gods Medusa for free?

Yes, you can. Power of Gods: Medusa can be played in a free mode. Without spending a single dollar, you can practice the game. Please mind that you won’t be able to earn money while playing the game for free.

What is the maximum win to expect?

You can win up to 2,500x your bet as part of the Hold the Jackpot bonus game. The Grand Jackpot is also a worthy thing reaching up to 2,000x your bet.

Is there a free spins bonus round in Power of Gods Medusa?

No, there isn’t. Unlike many video slots, this one doesn’t have a traditional bonus round. At least, you don’t have to pay for the spins coming with the Hold the Jackpot bonus.