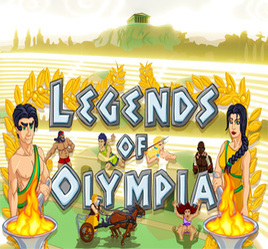 The Secrets of Ancient Greeks: Play Legends of Olympia Online

Introducing Legends of Olympia to the public, Saucify put emphasis on the culture and history of Ancient Greece, namely the Olympic Games. The slot is a classic one, played on 5 reels and 50 paylines. It promises great fun for the fans of thematic games.

In Legends of Olympia, there are symbols that represent different types of sports. You can play on the maximum number of paylines, the minimum betting amount being 50 cents per spin. Coin amounts start at 1 cent. You can select a coin denomination that is right for you, as well as the number of active paylines and the number of coins.

You can bet the maximum number of 250 coins and use the autospin feature to speed up the gaming process. The maximum jackpot for the game is 30000 coins. The game contains two expanding wilds, represented by a man and a woman that are holding the Olympic torch. The wilds tie in with the theme of the slot and can replace any symbols with the exception of the scatter. When appearing on reels 2 and 4, the wilds cover the entire reel and secure wins.

The scatter symbol in Legends of Olympia is presented by the golden wreath. It triggers the free spins round in case there are 3 or more golden wreaths on the reels. The wins that are used during this feature are doubled. You will also come across symbols such as the gold medal, the silver medal, and the bronze medal.

The layout of the slot allows you to play up to 50 lines. You can also choose the coin value and activate the autospin feature. The autospin feature awards 100 games. The symbols with the highest denomination include:

The runner symbol will provide you with 200 coins for 5 on the line, while the jumper guarantees getting 150 coins for 5. The stadium and the medal provide for medium wins. The torch-bearing couple is the main symbol of the game. You can find them on reels 2 and 4.

A delightful animation of the two lighting the torch is activated once you start playing. The golden wreath is the scatter that will deliver a multiple of the total spin amount, that being 100x for 5 anywhere on the reels. You will also get 50x for 4 and 15x for 3, the free spins game starting with 3.

What are the wild symbols in Legends of Olympia?

As you start playing, you will see a man and a woman that have the Olympic torch. These are the wild symbols that will appear on reels 2 and 4.

What is the scatter symbol in Legends of Olympia?

The scatter symbol in Legends of Olympia is the golden wreath. It can award 100x your bet for 5 on the reels.

Why should I play Legends of Olympia?

If you are a fan of games that are focused on the history of the human race and its prominent achievements, this slot is right up your alley. The layout of the game is superb, and the title is designed to resemble Greek writing.

What are the main features in Legends of Olympia?

Legends of Olympia is a slot that has features displaying the original sports designs found in Ancient Greece. You will become familiar with symbols such as a discus thrower, a woman with a spear, a boxer, a runner, a jumper, a medal, and a corner of the Olympic stadium.