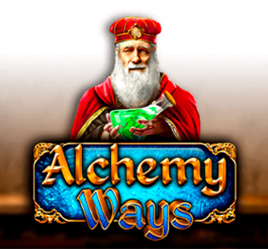 Alchemy Ways is a relatively new slot developed by Red Rake Gaming. Based on the 6×10 matrix, it offers a million ways to win. There are free spins, multipliers, as well as visible and hidden symbols, which encourage the fantastical atmosphere in the game.

Alchemy Ways is known as an alchemy-themed slot. Being devoted to the Ancient Greek form of natural philosophy, it features a lot of unusual and even mystic symbols in the gameplay. These include skulls, magic books, candles, and mysterious liquids. High-quality graphics makes the game setting look unsettling. But this is exactly what makes it so unique.

The slot has no soundtrack but a series of sound effects. When players enter the laboratory or spin the reel, they hear mysterious sounds.

Alchemy Ways offers a series of bonus features that aim to make the game more interesting and exciting. Players can claim any of them.

A mystery symbol happens to be part of the combination. It appears randomly on the reels to release a random symbol. A combination of such symbols leads to a winning outcome. Losing spins will complete a meter in the game, namely another blue elixir. Once it’s fully covered, it will launch the Alchemist Wheel with different multipliers.

The game can be launched as a bonus. A losing spin will add the bet value to the percentage in the blue liquid. Once it’s full the Alchemist Wheel will reveal himself.

The wheel involves a lot of multipliers and double multipliers. It is important to accumulate as many of them as possible to get the maximum benefit.

By landing ten or more Emerald Elixir symbols, players will collect some free spins. An Alchemist symbol with a green background will get a number to be added to the number of Elixirs. During the free spins round, an additional reel with multipliers will be started. Four extra spins can be obtained for a prize less than x12.

Mystery symbols are hidden inside the blocks. Eventually, they pop up on spins randomly.

With an RTP of 95.3%, players have a pretty good chance of winning the game. The maximum payout may reach up to 8,000x the stake.

What are maximum and minimum betting limits in Alchemy Ways slot?

While adjusting their bets, players can choose from 0.20 to 25.00. This isn’t the biggest range in the gambling world, but it’s good enough for players of different budgets.

What are the multipliers in Alchemy Ways slot?

Every symbol has individual multipliers. For example, card symbols can multiply the wins from 0.02 to 0.35. Silver ingot scatter can activate a multiplier from 1x to 100x, depending on the number of matches.

No, it doesn’t. The slot is perfectly compatible with Android and iOS mobile devices. Without any download, the slot can be launched via a mobile browser.