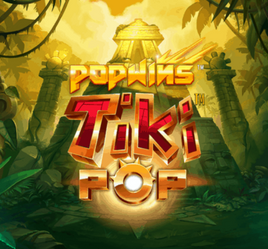 Head to a tropical island in the Pacific Ocean in the slot game TikiPop from Avatar UX. The game features cascading reels and free games. The features include scatter symbols, wild, cascading reels, and FS. The main themes are Polynesia and ancient civilization.

Manufacturers have chosen a tropical island as the main theme. The one-armed bandit can be quite profitable, primarily because it has excellent rates of return. RTP in this game is considered above average. Among other things, the video slot has quite a high dispersion, and the size of the winning potential is thirty-two thousand.

Each winning combination pops, creating two new symbol positions. The reel set increases in size, allowing one to add up to two extra rows per reel in the main game. If a player manages to increase all five reels to the maximum size of five rows, their total winnings will double. The number of ways to win has increased from 468 to 6,250 in the main game.

Releasing at least three scatters on a single spin triggers the bonus round. A player gets seven, 11, or 15 FS on a roll of three, four, or five scatters, respectively. A user has a 50/50 chance of boosting your bonus round to the next level.

Players will start with a randomly selected reel configuration where the least expanded is 4-3-3-3-4. This continues to the fully expanded grid of the base game 5×5, but a player can add a couple of additional rows to it at the bonus level. Then, a progressive multiplier increases by +1 for each PopWin. The multiplier has no upper limit.

Players will be able to take advantage of many bonus features. First of all, the game provides a profitable additional round. It consists of three levels: seven, eleven, and fifteen free spins. Their number depends on how many scatter icons will fall. Participants can use the opportunity to go from low levels to higher. This requires participation in the risk game.

However, gamblers should understand that the chances of success are only 50%, and there is a good chance of losing all the money earned for the bonus round and returning to the main game. The gameplay then looks like this: 5×3; by the end, it can expand to 5×7. It affects the number of payouts.

The extra round is a bit different. The shape of the reels is random. If the player pays 100x, seven additional spins are activated. As we can see, TikiPop is a rather generous video slot machine.

In how many ways can a gambler win in TikiPop?

How high is RTP in TikiPop?

Which symbols are present in TikiPop?

Only a scatter symbol is available; wilds and multipliers are absent in TikiPop.

What makes TikiPop stand out from other similar slots?

This online slot machine is different because it is based on the gaming mechanics PopWins, which is becoming increasingly popular in the gambling market.